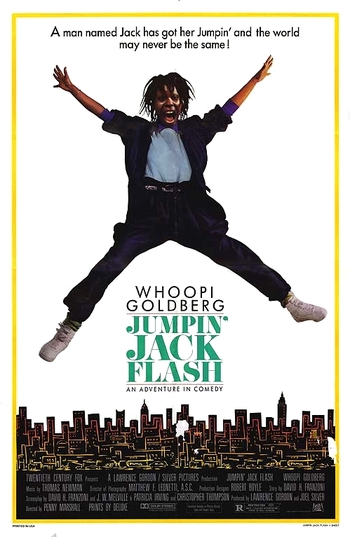 Terri: Personal chit-chat is prohibited on the International Bank Transponder.
Jack: Not on it.
Terri: How are you transmitting?
Jack: Clamshell terminal. Can't say anymore. This channel unsecured.
Terri: Whoa.
Advertisement:

Jumpin' Jack Flash is a 1986 Cold War suspense comedy starring Whoopi Goldberg as Terry Doolittle, a data entry worker in the processing department of a downtown New York City bank. One of her guilty pleasures at work is to drop notes to the operators at the receiving ends of the transfers she processes, who are often in another country, which generates a number of international friendships and trading of recipes, mixtapes, etc. Right after her boss (Peter Michael Goetz) tells her to stop wasting company resources ("Computers are not friendly, Ms. Doolittle." "I'm not a computer, Mr. Page."), she receives a message from "Jumpin Jack Flash", which she tries to dismiss, but becomes intrigued with his mysterious statements. She arranges a time to chat later that night (in the office), but first has to deduce Jack's "code key", which (though it is not stated) will encrypt their communications. The answer is in The Rolling Stones song Jumpin' Jack Flash ("Sing with me and find the key,") and while she comes up with many seemingly good guesses, she realizes that the "key" is, literally, the key of the music: "B-Flat".

It turns out Jack is a spy, and is stuck in Eastern Europe without a way out. He needs someone on the outside to reach one of his contacts and tell them his situation, so they can arrange for a new exit plan. Terry is led to his apartment, where she can find a hidden list of his contacts (she also gets to hear his voice, which is from that point on used in voice over for all his messages). Her meeting with Jack's first contact goes poorly when he is shot dead. She next reaches the wife of one of Jack's contacts (Annie Potts), who has connections at the NYC British Consulate. After various chases and near-misses, Annie and her family suddenly disappear, and another one of Jack's contacts (Roscoe Lee Brown) tells Terry that Jack is a pawn, not meant to be saved but sacrificed for more important reasons. Terry rejects this, and after being drugged by a KGB lackey (James Belushi), barges her way into the presence of the Consul's wife (who formerly had a relationship with Jack), and angrily demands she convince her husband to provide Jack with a new escape plan. Eventually, the wife relents.

All this time, Terry has been building an infatuation with Jack that edges closer to a love affair, even though at one point she has to correct his misconception that "Terry" is a man, which causes Jack to freak out and plans to cut off contact, but she convinces him to let her keep helping him. Eventually Jack seems to return Terry's textual affections.

Unfortunately, it turns out that one of the Consulate staff, Talbott (John Wood) is a KGB mole, who ultimately provided the (bad) contact to the consul. Terry bluffs that she sent Jack different information, and escapes, running to her office to get on the computer and warn Jack about the bad information just as he is about to head out to his certain death. The KGB moles are in tow, and follow her into the office, preventing her from sending the message. A firefight ensues, where it is discovered that coworker Marty (Stephen Collins) is actually an undercover CIA agent, who takes out most of the KGB goons, and Terry manages to disable Talbott, much to his shock, and send off the message. Marty (real name Peter and the last of Jack's secret contacts) gets onto the chat session with Jack and gives him a good contact.

Jack promises to meet Terry for dinner when he gets back to New York, but he never shows, being held up in London. Terry feels silly, and later tries to blow Jack off angrily, when he reveals he is sitting ten feet from her on another computer. We finally see Jack (Jonathan Pryce), and the pair have a romantic reunion to a cheering crowd of coworkers.