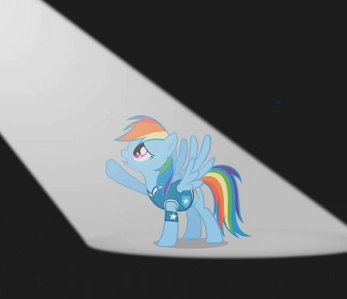 Rainbow Dash has something important to sing.
"OK. It starts off...
...a dark stage,
and then a beam of light,
and you can see me and my guitar."
— Dewey Finn, School of Rock
Advertisement:

This Spectacle trope comes from the theatre, and like many other things in the theatre, this is a method for directing the audience's attention. All the stage lights go out, save for one spotlight that shines down on something, and suddenly that something has become everything. Most often it is a character, saying or doing something that really matters. Sometimes there are more than one spotlight at work, simultaneously or not. But the point is always to momentarily reduce the world to a small, enclosed space where there are no distractions.

A Sub-Trope of Chiaroscuro. The contrast between light and dark is what makes it work.

This trope is found in most media, including animation, where no physical lights are involved. It has existed for longer than even electrical stage lighting (the term 'in the limelight' comes from the pre-electric chemical method, making it Older Than Radio), and can still claim to have both popularity and credibility. It is also a staple of Film Noir; in film posters, often the Dick or some streetwalker would be standing under a street light, and everything else would be black.

The closest thing you can find to a Real Life example of this is using a spotlight on a stage for delivering a speech or something similar. The Dramatic Spotlight very effectively creates a dramatic mood, and since it is so effective, it is also easy to misuse. If you have a poorly-written character whose troubles you haven't made the viewers care about, the Dramatic Spotlight isn't likely to make them start caring; it is likely to produce Narm. When Played for Laughs, however, there is a lot of humour to be found in deliberate overdramatization. Large Hams thrive and flourish in this light.

This trope can be seen as a more extreme version of Notice This and Conspicuously Light Patch, where something also stands out in an image. In those tropes the focus point wins the fight for attention easily, while in this trope, there isn't really a fight.

Often worked into the Corner of Woe.

Compare Emerging from the Shadows.

Example of:
The Coats Are Off