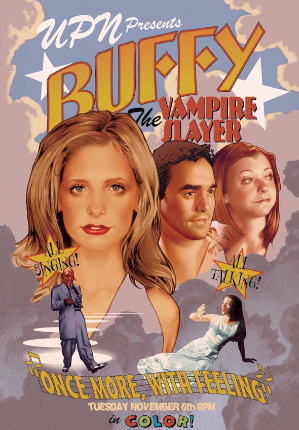 Phineas: What do you say? We'll do all the same things, but we'll break into spontaneous singing and choreography with no discernible music source!
Ferb: Hmmm.... What assurance would we have that everyone else would also break into song and do the same thing?
Phineas: I don't know. I think they probably will.
Ferb: Fair enough. I'm in.
— Phineas and Ferb, "Rollercoaster: The Musical!"
Advertisement:

Once in a while, a show will shake things up and break the formula. One way of doing that is by turning the show into The Musical for an episode.

A Musical Episode is structured around the cast breaking into song (and possibly dance) throughout the episode. It might use an in-universe justification, such as a Battle of the Bands, some sort of weirdness, or a new character causing all this cheery singing. Alternately, it can play like a Broadway show where it's just taken for granted that some events will be dramatized through song and dance.

This trope is sometimes used to showcase the vocal, dance or other talents, other than acting, of members of the cast, which do not usually get revealed during the normal activities of the series. It really helps that the members of your cast who get singing parts for the episode really can sing. The next best option is to hire a singer who sounds reasonably close to the actor and teach the actor how to lip sync.

Opinions on a Musical Episode can differ wildly. Many will enjoy the up-beat, unexpected change of pace, while many will dislike it for that very reason. Also, like any premise, the songs and choreography have to be good, or else you're doomed from the start. But if they are good, such episodes tend to be very memorable because songs tend to stick in people's heads.

In the final scene of the musical episode "LABretto", Dexter sums up his tragic fate.

In the final scene of the musical episode "LABretto", Dexter sums up his tragic fate.