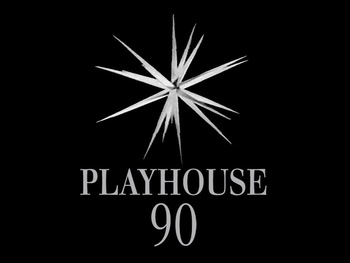 A dramatic Genre Anthology series which aired for four seasons (1956–60) on CBS, Playhouse 90 was considered a serious and prestigious production. The title has nothing to do with The '90s; rather, it refers to the length of an episode: ninety minutes including commercials. (At the time, most live drama series were an hour long.)

Eleven of the 134 episodes were written by Rod Serling. Twenty-seven were directed by John Frankenheimer (who at one time was directing every third episode). Directors were permitted to choose their scripts, which was a rarity for programs of this type. Among the actors who had roles in multiple episodes are Peter Lorre, James Mason, Jack Palance, Mary Astor, and Sterling Hayden.

Scripts for the series include adaptations (of novels, stage plays, and films) as well as original works; some of the latter were in turn adapted into theatrical films.

The following works originated as Playhouse 90 scripts and have their own trope pages:

Other episodes of Playhouse 90, and the series as a whole, provide examples of: