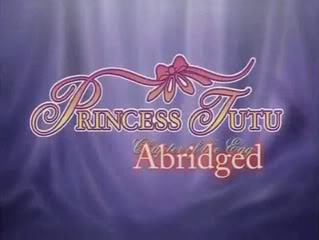 The Abridged Series of Princess Tutu by Tutu On Abridger

. Has a lot of fun with the nonsensical aspects of the series.

Unlike many Abridged Series, Princess Tutu Abridged does not reduce the number of episodes in the series. This likely stems from the fact that the original show is itself fairly compact, with important events even in seeming filler episodes. Much of the drama, humor, and even some actual lines from the dub, are also left in and used unironically. Characters are exaggerated, but left mostly unchanged. Lampshading is often done by referencing the trope directly by name.

However, this does not mean that the Princess Tutu Abridged team has not made this parody their own. A lot of effort has been put in to making this show enjoyable. Of particular note is their two-part Musical Episodes, with all voice actors singing very well, even outside their own vocal range. The team specifically tried to avoid the obvious jokes, like the Ho Yay between Fakir and Mytho, and instead spring for less expected humor, such as Liliae and Pike's Ballerina Mafia.

The team has a pretty complete set of pages

on The Abridged Series Wikia, including second-by-second music lists for each episode and nice trivia about the team. Might border on All There in the Manual, except that the information is not required to understand or enjoy the series.