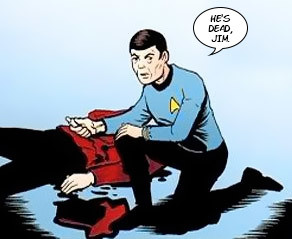 Characters (and meta-wise, the audience) are able to tell the instant another character has died even though such a determination can actually be quite difficult and mistakes are made even by experienced physicians (e.g. people Waking Up at the Morgue). How accurately depends on a few factors:

Rarely is anyone ever just unconscious or in a coma, unless they're recurring and merely Left for Dead by the bad guy, supernatural, about to be Waking Up at the Morgue, or in some cases, someone deliberately faked someone else's death by lying to the others.

This, of course, is a reference to Leonard "Bones" McCoy's frequent (and frequently parodied) line in Star Trek, although it could debatably be justified by various types of Applied Phlebotinum.

Characteristic methods used to determine a character's death involve checking the pulse at one of a few places on the body, listening for a heartbeat. Other methods involve:

A common variation on this trope is when the character's death is shown metaphorically, mainly for the benefit of the audience:

Compare Mistaken Death Confirmation, where a character's death is apparently confirmed by examination of the body or evidence such as an obviously fatal injury, but the character somehow either isn't dead or comes back to life.

Since this is a Death Trope, expect unmarked spoilers.