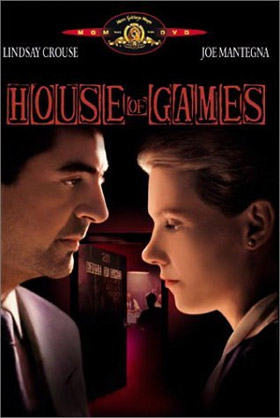 "Of course you gave me your trust. That's what I do for a living!"
— Mike
Advertisement:

House of Games is David Mamet's 1987 directorial debut. He also wrote the screenplay, based on a story he wrote with Jonathan Katz. The film's cast includes David Mamet's then-wife Lindsay Crouse and Joe Mantegna. Many actors who would become Mamet's Production Posse have roles in the film.

A famous psychologist, Margaret Ford (Crouse), meets a gambler and Con Man, Mike (Mantegna), who introduces her to his dark and seductive underworld of deception. What at first starts as an intellectual curiosity and then a thrill, soon goes over her head.