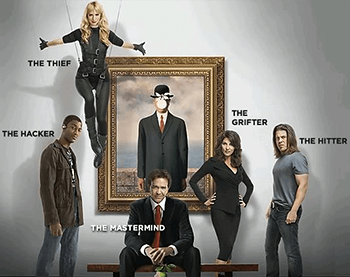 Just like the good guys have a Command Roster, when your Villain Protagonists are involved in a Caper (or your everyman protagonists in a Heist Episode), characters tend to fall into a number of roles. Unlike the Command Roster, however, some of the roles really depend on what kind of heist is going on, so the actual number of members and which jobs are included in the Badass Crew, are somewhat more variable than in the military example. Characters are also more likely to have more than one specialization, or some of the more specialized roles are farmed out to Satellite Characters who aren't really part of the main crew. Sometimes the crew will fall into a Five-Man Band if it has the right amount of members.

The roles in the Caper Crew tend to fall along the following lines:

Eggman brings in the members needed to pull off the heist at Casino Zone.

Eggman brings in the members needed to pull off the heist at Casino Zone.