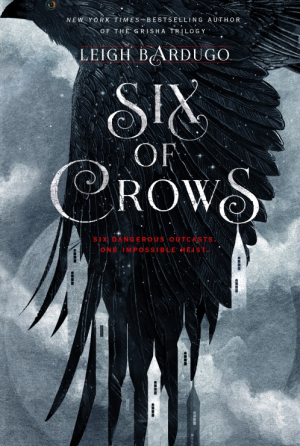 "No mourners. No funerals."
Advertisement:

Six of Crows is a 2015 fantasy heist novel by Leigh Bardugo. It is part of The Grishaverse and follows the events of The Grisha Trilogy.

The story follows the adventures of six teenage criminals:

When news of jurda parem, a dangerous new drug that greatly boosts the powers of Grisha, spreads among the crime lords of Ketterdam, Kaz recruits the others for an ambitious job: break into the Ice Court in Fjerda, the most secure prison in the world, and break out the scientist responsible for its creation.

The sequel, Crooked Kingdom, concluded the duology in 2016; it has the protagonists attempting to rescue a captured comrade and stay one step ahead of their enemies.

Leigh Bardugo also wrote The Nikolai Duology which includes characters from this series and from The Grisha Trilogy.

Elements of the duology were adapted into Shadow and Bone, a Netflix series based on The Grisha Trilogy. The show stars Freddy Carter as Kaz Brekker, Amita Suman as Inej Ghafa, Kit Young as Jesper Fahey, Danielle Galligan as Nina Zenik, and Calahan Skogman as Matthias Helvar.

A third book, taking place several years after Crooked Kingdom has been announced with no set release date.