Film / Now You See Me 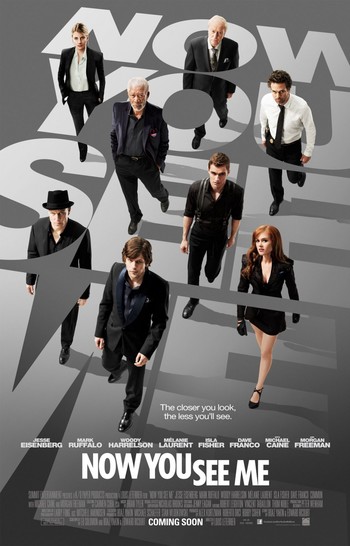 4 amazing magicians. 3 impossible heists. 1 billion dollars. This is no illusion.
"Whatever is about to follow, whatever this grand trick is, is really going to amaze. Look closely, because the closer you think you are, the less you'll actually see."
— Thaddeus Bradley
Advertisement:

The film is about a group of Robin Hood-style magicians called the Four Horsemen, comprised of J. Daniel Atlas (Jesse Eisenberg), a professional street magician who specializes in escalating card tricks; Merritt McKinney (Woody Harrelson), a hypnotist, mentalist and mind reader; Henley Reeves (Isla Fisher), an escape artist; and Jack Wilder (Dave Franco), a street artist, voice imitator and Master of Unlocking. They use their illusions to steal money and give it to their audience despite the impossibility of it. As they become more infamous, an FBI agent and an Interpol detective chase after them.

Don't confuse with the magician-centric Disney film, Now You See It....

Now You See Me provides examples of:

Thaddeus Bradley explains how the Four Horsemen robbed a bank in Paris from a stage in Las Vegas.

Thaddeus Bradley explains how the Four Horsemen robbed a bank in Paris from a stage in Las Vegas.