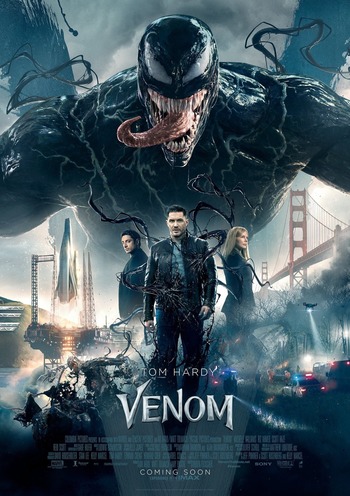 The world has enough superheroes.
"I'm a reporter. Means I follow people who do not wanna be followed. I look into things the government may not even know about. But this latest time, I found something... really bad. Something I can't explain. Something... alien. The reason I'm worried? Because right now it's up my ass."
— Eddie Brock
Advertisement:

Venom is an Anti-Hero sci-fi Superhero Horror movie based on the popular Marvel Comics villain-turned-anti-hero of the same name from the Spider-Man franchise. With production being handled entirely by Sony and no involvement with Marvel Studios, it was produced by Avi Arad and Matt Tolmachnote (both of whom were producers on The Amazing Spider-Man Series, and the former being a producer of many past Marvel features, including the Sam Raimi Spider-Man Trilogy as well as Iron Man and The Incredible Hulk with Kevin Feige) and directed by Ruben Fleischer with a script written by Jeff Pinkner, Scott Rosenberg, and Kelly Marcel. The movie was released on October 5th, 2018, and is the first film in Sony's Spider-Man Universe.note SSU for short.

Down-on-his-luck journalist Eddie Brock (Tom Hardy) finds himself looking for a big break as rumors of corrupt and unethical practices within the Life Foundation start to surface, and along the way he discovers that the corporation is forcing alien life forms known as Symbiotes to bond with unwitting test subjects. Eventually being infected by a Symbiote that's willing to help Eddie while advancing its own agenda, the two become a "superhero" known as Venom as they work together to shut down the Life Foundation for good. Michelle Williams and Riz Ahmed appear as Anne Weying — Eddie Brock's ex-fiance — and Big Bad Dr. Carlton Drake, respectively. Woody Harrelson makes a cameo as Cletus Kasady in a mid-credits scene, setting up his role as Carnage for future films.

Venom is meant to be the first film of a Shared Universe of Spider-Man spin-offs, focused on other superpowered characters that have been introduced across decades of comics — with nearly 900 characters free to appear in the movies without the involvement of Marvel Studios.

With that in mind, the web-head himself does not appear in this film, nor is he referenced in the slightest.

For a time, there was heavy speculation on whether or not Venom could be set in the continuity of the Marvel Cinematic Universe, not helping matters were conflicting views between Kevin Feige and Sony exec Amy Pascal, with Feige's being a more or less firm "no" ahead of the film's release (which Pascal later agreed with). Because of this, Spider-Man was unable to appear, or be referenced, in this film as part of the initial contract to include Spider-Man in the MCU.

However, things changed in August 2019, when the end of the deal between Marvel Studios and Sony Pictures was initially cancelled; the move ended those restrictions, allowing Spider-Man to appear in Venom sequels as soon as Holland signed a new contract. However, a month later, the deal was renewed after a period of negotiation, with Feige subsequently releasing a statement indicating that Holland's version of Spider-Man could be used for both the MCU and the SSU. As such, Morbius (one of the first follow-ups to this movie) features explicit connections to the MCU's Spider-Man movies.

"We all have our own problems. Our own issues. Our own... demons."
Feedback