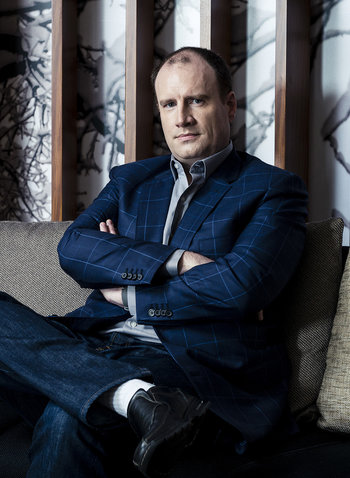 A rare picture without his signature baseball cap with appropriate Marvel logo.
Q: How many hats do you own?
A: dozens
— One question and answer on Kevin Feige's AMAA

Kevin Feige (born June 2, 1973 in Boston, Massachusetts), pga, is an Oscar-nominated American film producer best known for his work as the head of Marvel Studios and overseer of the Marvel Cinematic Universe.

He has produced every film of the Marvel Cinematic Universe. He's often credited for the MCU's successes, which have since spawned many similar efforts from other studios releasing their own major Shared Universe franchises, including Marvel Studios' main rival. (Ironically enough, he used to be roommates with DC's Geoff Johns, who has been involved with the development of several of DC Films projects; the two remain good friends.) Prior to his work at Marvel Studios, he was also a credited producer on pre-MCU Marvel movies such as the X-Men Film Series, Sam Raimi's Spider-Man Trilogy, Daredevil and The Punisher.

Feige could be considered Born Lucky, or at least someone who consistently managed to be in the right place at the right time to pull something as ambitious as the Marvel Cinematic Universe off. His producing career was kickstarted at a time when superhero movies had a niche appeal and were just about to get a huge boost in profile from the first few X-Men and Spider-Man movies, which he was involved with in making thanks to an internship with Richard Donner and his wife, Lauren Shuler-Donner — an internship that eventually introduced him to Avi Arad, who was in charge of Marvel's movies at the time and went to Feige for knowledge of the source material. Feige then took the reins of Marvel Studios after Arad, who had started development on the first two films of the MCU, stepped down from the company, thereby giving him creative control over what would soon become the biggest movie franchise ever. Iron Man was a breakout hit, but the MCU would really take off with the release of The Avengers, which vastly overperformed and became the third-highest-grossing movie of all time at the time of release.

After years of hits, the circumstances lined up just right so that he could gain the film rights of dormant Marvel IPs just waiting to be reimagined, including gaining shared custody over the Spider-Man property by means of a handshake deal with Sony Pictures that initially lasted five movies, with an extension later adding at least two more appearances to the mix. The merger between The Walt Disney Company and the film and television divisions of 20th Century Fox meant that he will have a hand in making X-Men and Fantastic Four movies and shows again, and this time in the context of the greater Marvel Universe. Furthermore, the presence of She-Hulk on Disney+ indicates that the company has a way to utilize the characters that Universal Pictures has the distribution rights to (since they purchased the Hulk and Namor movie rights and the rights to those associated characters). It only took Feige a decade for his franchise to completely change the landscape of Hollywood blockbusters, and the MCU shows no signs of slowing down despite some audiences' concerns of "superhero fatigue".

Most notably, the franchise produced Black Panther (2018) which became the first superhero film nominated for Best Picture, with Feige earning the nomination for the first time. Though it lost the main award, it won three Academy Awards for Costume Design, Original Score and Production Design — the most ever for any superhero film.

Kevin Feige is also taking his first step into a larger world with a Star Wars spin-off, which will see him collaborate with industry legend Kathleen Kennedy. This marks the first time that he has ever worked on a non-Marvel film as a major producer, though he previously served as an associate producer for a handful of smaller movies that the Donners were involved with.

He's also produced some television, most notably Agent Carter, Iron Man: Armored Adventures, and Wolverine and the X-Men (2009). With the arrival of Disney+, Feige has plans to launch new limited series based on the supporting characters introduced in the MCU's films in true cinematic fashion. The platform also sees the debut of new characters who will later cross over into the films.

Disney announced a reorganization of Marvel effective October 2019 where all multimedia units, including Marvel Television and Marvel Animation, were transferred to Marvel Studios, overseen by Feige, who will also take on the role of chief creative officer of Marvel. With the reorganization, Marvel Comics remains the only standalone asset of Marvel Entertainment.

Oh, and his surname is pronounced FY-ghee.