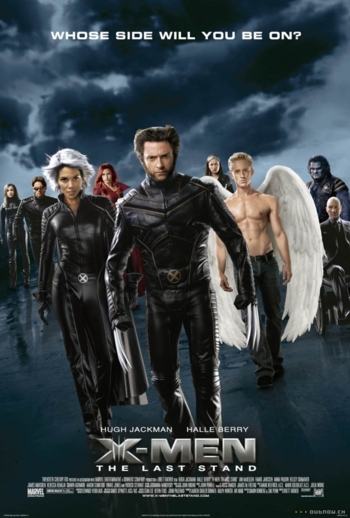 Take a stand.note From left to right:Shadowcat, Cyclops, Storm, Phoenix, Wolverine, Rogue, Angel, Beast, and Professor X.
"Mutants and humans. They have long struggled to coexist. While some try to unite the world, others try to dominate it. Neither strategy has prevailed. But when conflicts reach an impasse, inevitably something happens to shift the balance forever."
— Charles Xavier (Deleted Scene)
Advertisement:

X-Men: The Last Stand is the third movie in the X-Men Film Series following X2 involving the discovery of a "cure" for mutant genes, causing Magneto to start recruiting for a mutant uprising. Also, Jean Grey had a Disney Death, but evidently Came Back Wrong as a result. Despite all this, the X-Men move to defend the cure-making facility from Magneto's forces.

The last of the X-Men Trilogy even though there was the possibility of a fourth entry, the series would branch outward into spin-offs and prequels such as X-Men Origins: Wolverine and X-Men: First Class before ultimately being rebooted. The Phoenix was later revisited in Dark Phoenix.

Chronologically followed by The Wolverine and X-Men: Days of Future Past.