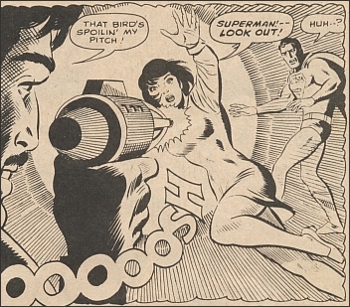 Protip: Unless it's firing Kryptonite bullets, Superman can probably survive that gun better than you can.
"Alright, it's time to redeem myself. Through one final act of redemption (stands between Gohan and a fairly slow Beam) I'll save Gohan an— Wait a second, why didn't I just grab him? I can probably still do that now, actually. Yeah, that's it, I'll grab him, and throw him out of the wa— AAAARRRRRGH!"
— Piccolo, Dragon Ball Z Abridged
Advertisement:

We all know the trope. Everyone's caught in a life-or-death situation. One of the characters hedges their bets, steps forward so the others survive, and ends up on the "death" side of the equation. Pathos is obtained, tears are shed, etc., etc.

What can we say, it's pathos — logic must be left by the wayside. The Plot Reaper has spoken.

A Stupid Sacrifice is what happens when a Heroic Sacrifice has a head-on collision with Fridge Logic. It is not a Senseless Sacrifice, where someone offers themselves up as a sacrifice only for outside factors to make it useless; this is when a sacrifice occurs when anyone in command of all their logical faculties could've seen that it didn't have to end that way. Surprisingly little overlap with Martyr Without a Cause, but sometimes the result of Chronic Hero Syndrome: The Knight Templar or Well-Intentioned Extremist may make them — and lament them as Dirty Business — because they can't be bothered to notice that they were unnecessary. If a proposed sacrifice is nixed on the grounds it would be stupid, see Who Will Bell the Cat?. Note that this doesn't apply when the character could have lived, but quite clearly didn't want to.

Often a case of Writer on Board. They want this character to die, for whatever reason. There are no other alternatives, period. This situation makes it similar to Dropped a Bridge on Him; the "sacrifice" part making it "honorable", but they weren't going to make enough effort to make it the only logical way.

If the sacrifice is stupid because it didn't accomplish what it was supposed to but was still the logical choice, that's Senseless Sacrifice, not this trope. The two tropes can overlap when a Stupid Sacrifice doesn't accomplish its goal, but it is rare.

A Sub-Trope of Heroic Sacrifice. A Counter Trope to Negate Your Own Sacrifice. Compare "Shaggy Dog" Story.

This is a Death Trope, so beware of unmarked spoilers!