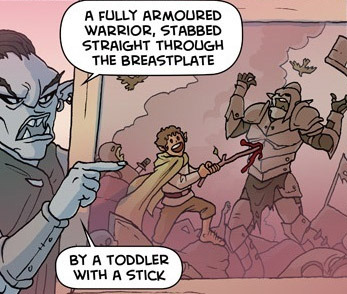 Just wait 'till you see her solution...
"I have never seen stormtrooper armor protect anyone from anything."
— Neeku Vozo, Star Wars Resistance
Advertisement:

In fiction, or at least a large portion of it, armor has virtually no protective qualities. Characters who wear no armor to speak of are no more (and often less) at risk of injury or death than somebody who is "protected". A single swing of a sword is enough to kill an opponent wearing full plate armor. All arrows are armor-piercing and will penetrate even thick armor as if it were just a sheet of paper. Indeed, it often happens that people who wear armor find themselves far more capable after they either discard it or have it destroyed for them by the nice people out to kill them. In the latter case, it leaves one wondering why they bothered with it in the first place, if they can survive attacks that completely demolish their armor anyway.

There are a couple of reasons that this trope may appear:

A potential handwave is that quality armor (such as the plate suit that stamps someone as "medieval warrior" on sight) should be quite expensive; mooks might be issued cheap protection that only looks like quality armor. From a more meta perspective, Unspoken Plan Guarantee may also be connected: the armor represents a plan to be invulnerable, which, once presented to the audience, has to fail or it'd be boringly predictable. That would do a lot to explain why hidden Bulletproof Vests usually work. The Law of Diminishing Defensive Effort is a reason that heroes or the "cool" characters are often less armored than the common rabble; they're either confident enough in their skill to not get hit in the first place, or else so superhumanly tough that armor would be superfluous.

As illustrated by various examples in the Real Life section, the balance of power between weapons and armor has fluctuated throughout history. There really have been certain times when a new weapon appeared that could reliably defeat even the highest practical level of armor, leading to decreased reliance on armor for protection until some improved version was invented. The trope can be justified in a story if it depicts such a transitional period in technology, or if a violent First Contact occurs between peoples or species of different technology levels. The trope becomes unrealistic when people of the same technology level as their foes are shown to wear armor that doesn't have enough protective function to justify its expense and encumbrance, to the point where you wonder who bothered to invent that useless armor in the first place.

As in real life, there are many different levels of threat and also different levels of protection. World War I saw the reintroduction of steel helmets, which may not have been expected to do much good against rifles and machine guns, but did greatly reduce deaths and injuries from low-velocity shrapnel. Similarly, an armored car for reconnaissance may have a shell that's proof against machine guns, but wouldn't stand a chance against the main gun of a tank. Troops are armored according to their role, and no matter how armored you may be there is always someone out there with a Bigger Stick. Mobility, cover, and not being seen are often at least as important as armor for avoiding damage.

The logical extreme of this trope is the Full-Frontal Assault, where the warrior doesn't even bother to wear clothes. See also Tanks for Nothing, if the useless armor in question has treads and a gun on it.

For non-armor objects that make for bizarrely non-useless armor, see Pocket Protector. The best armor, of course, is Plot Armor. When armor isn't useless, but it limits speed, see Shed Armor, Gain Speed. See Armor-Piercing Attack or Anti-Armor for different ways of modeling the vulnerability of armor, and Body Armor as Hit Points, in which your game character gets armor points as a way of supplementing their hit points. The inversion is Armor of Invincibility, which is not only not useless, but amazingly good.