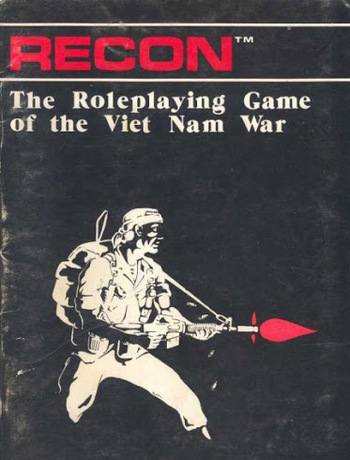 This time, it's your fight to win or lose.
Advertisement:

A Tabletop RPG (straddling the line with wargames, particularly through the use of miniature) where the players control troops in The Vietnam War. Characters are encouraged to be made disposable and interchangeable, and the story is barebones, focusing instead on random encounters on the way to generic objectives.

The game saw four new expansions and adventure modules before being reworked into Recon Revised.

Characters have three attributes: strength, alertness and agility, each rolled on a percentage die. If the total is under 100 or any one score is below a thirty, the character is 4-F, unfit for duty and rerolled. The player buys skills in bundles of ten called Military Skill Programs. For instance, basic training contains ten skills: athletics, running, climbing, weapon proficiency pistol, W.P. assault rifle, W.P. grenade and hand to hand: military basic. With other skill trees based along the basic routes of Military, Espionage, Police and Rogue. You get two of these based on your class.

Skills and gear play a major role as compared to supernatural powers in other Palladium games.

A community has arisen around adapting the rules of RECON to various wars historical and contemporary.