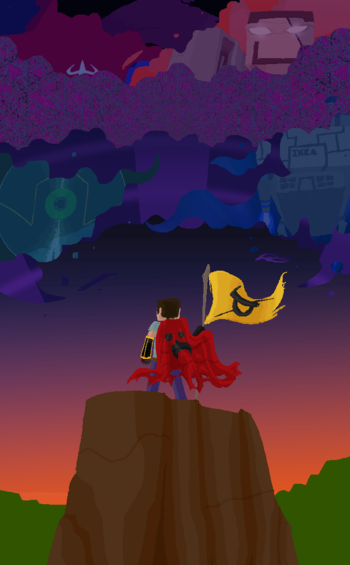 Nothing is new, it's all happened before. Yet none of you have any idea what's in store.
"The Pantheon.
"Collectively, the high seat of all congregations of tropes, idioms, and fandoms alike. Seated atop the highest of the high, they stand on pedestals, hoisted up by the masses as "the" representative of what they are, who they stand for, and who they could become.
"Each in their own right, a walking path of destruction. Some, wage war. Others, wage love. Yet even more, wage both. There are those who speak in tongues aflame with passion. There are those who do not speak at all, yet carry more weight than ten thousand years. There are those whose presence can move mountains with nary a breath from their lips. There are those who define existence with a knife.
Advertisement:
"They come from hell and heaven. They come from galaxies where secrets can make gods blaze. They come in the name of the lost, the helpless, and all the world's evil, wrapped in a little package. They come from beyond even the fourth wall, and they fight for everything under the sun.
"Then, there's the Godmodder."
— Lord Herobrine, Destroy the Godmodder TV Tropes 2: Salvation

Destroy the Godmodder is a series of Play-by-Post Games originating on the Minecraft Forums that is Exactly What It Says on the Tin. It takes place in the world of Minecraft, which is being terrorized by a very powerful player known as The Godmodder. The Godmodder possesses the uncanny ability to block nearly every attack thrown at him, which makes the titular goal very nearly a lost cause. However, it is possible to beat him by either using attacks that can't be blocked or godmodded or by counter-godmodding one of his blocks. Of course, each successful attack (usually) only does 1 damage, turning the fight into a long and excruciating grind.

The game is managed by the Game Master, who, in-universe, updates the thread using an Update Terminal, letting them control a mysterious force known as The Narrative, changing the very plot of reality. In real life, though, the GM just takes all of the actions the players have done every turn and responds to them, determining whether they fail or not, and how successful they are in standard forum game fashion.

In addition to attacking the Godmodder, the players can summon charged entities to help out in the battle. These entities, depending on how long they were charged for, can become very powerful and hard to kill. Given the huge playerbase, there tends to be a lot of entities on the field at any given time, leading to some epic moments. The Godmodder and his allies will summon entities as well, some even being bosses, which leads to huge boss battles.

, was started by TT2000 on December 7th, 2012 and ended on September 1st, 2013. It details the Godmodder's rampage on GenericCraft, a suitably generic Minecraft server. Over time, a dedicated playerbase started to form, intent on completing the game. In a saga that took nearly nine months, the players had to deal with many different enemies, such as Terror Mobs (giant Minecraft mobs), a dimensional monster, Death himself, a reality-breaking Glitch, the Godmodder's massive in-game fortress, the Godmodder's promotion to Admin rank on the server, and his last weapon, the Anti-Chuck Norris Turret Tank.

The second game, Destroy the Godmodder 2

Operator!, was started by TwinBuilder on September 1st, 2013 and ended two years later on September 1st, 2015. It details the Godmodder forming his own Minecraft server after the events of the first game. Called GodCraft, he traps the entire Minecraft playerbase on the server where they are doomed to eternally ragequit. A new group of Anti-Godmodder rises up to fight him in an epic two-year-long battle spanning multiple universes. In addition to fighting the Godmodder, the players had to deal with the machination of the mysterious Employer, working behind the scenes to bring the villains from Homestuck onto the server in an invasion. They also had to combat the governments of Earth and their rogue supercomputer dubbed Project Binary, as well as many other unseen forces, both player-driven and not. The game was split up into four acts, each with their own major villains to fight, and three intermissions, which were breaks in the action that focused on side plotlines. The fifth act wrapped up the game's story. An epilogue was produced one year after the game's end, on September 1st, 2016, intending to tie the game into future games in the series and set up a reboot.

, was started by The_Nonexistent_Tazz on September 9th, 2015. It was intended to be the third 'major' game in the main series. It pretended to show events before DTG1 and DTG2, detailing how the Godmodder went from being a Gamma Tier godmodder to being the Omega+ Tier he is now by battling the previous Omega Tier Godmodder, UserZero, on her own server, but an unforeseen twist revealed that in actuality, it took place after Destroy the Godmodder 2 as part of a time loop. In a stunning reversal, the players defaulted to helping the Godmodder by defeating UserZero, who had her own nefarious plans at the heart of the server's World Tree... However, there were players who chose to side with Uzi or forge their own paths, believing if they stopped the Godmodder from winning, they could prevent the catastrophes that will occur later down the road. It ended prematurely after concerns over rampant drama and arguments affecting the GM's health were raised by players, and has been relegated to being "loose canon" by community agreement due to being unfinished.

The original series (now referred to as "oldcanon" for clarity) ended with DTG0, though the stories contained within have been continued through spinoffs, text adventures, and other miscellaneous works. Some spinoffs, however, are noncanon. A reboot has also been perfomed, creating an alternate continuity known as "altcanon" with the hopes of simplifying the series' labyrinthine plot and retconning oldcanon's glaring continuity errors.

, is created and run by Gutza1 and acts as a reboot of both the failed original MSPA session and a revival of the original canon. Starting on July 4th, 2019, it takes DTG 1, 2, and the TvTropes session as canon while selectively taking elements of other spin-offs in Broad Strokes. The plot concerns the machinations of the Godmodder as he enacts a hostile takeover of Homestuck's Paradox Space setting, merging every session of SBURB into one gigantic session- but the game and its playerbase are equally focused on the Descendants that rise to stop (or assist) the Godmodder this time around, bringing such characters as the robot girls D.I.G.I. and Aurora, the luck vampire and sheltered megacorp heir Keane McZupp, and the quirky yet omnicidal Devastator Undying (among others) to almost as much prominence as the Godmodder's schemes. It is ongoing and intended to be the start of a new series of games in the DTG canon.

There are also many other kinds of games in the DTG sphere; some canonical, some not. Below is a list of spinoffs.

There are many other spinoffs including Confront the Godmodder, Destroy the Snobmodder, and many more, but these are (usually) smaller scale and most are non-canon to the original games.

The DTG Wiki, maintained by the game's players, can be found here.

The DTG Forum, where players of all DTG games can discuss the series (and even play new games), can be found here.

The official DTG Discord server can be found here.

The tropes below are organized into several folders for tropes common to the series as a whole and others related to specific games.

Here lie DTG2 spoilers. Here's what's considered appropriate to mark with spoilers: anything in Act 2 from the Shatter onwards, anything in Trial 4, and Trial 6 until the end of the game. That includes the Epilogue. Browse with caution.