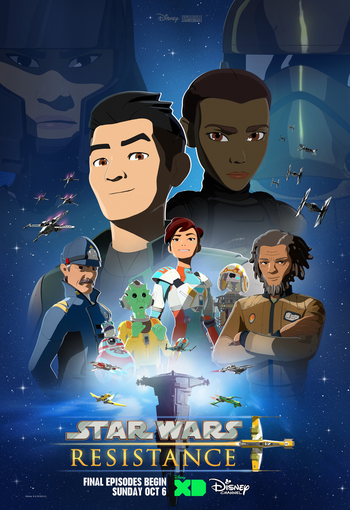 Some heroes stick to the plan, others just wing it.
"We are the Resistance now."
— Kazuda Xiono, "Descent"
Advertisement:

Beginning six months prior to the events of The Force Awakens, Resistance depicts the story of young Resistance pilot Kazuda Xiono (Christopher Sean), who is given a top-secret mission by Poe Dameron (Oscar Isaac) and General Organa (Carolyn Hennessy) to spy on the First Order at the Outer Rim fuelling station Colossus. Working undercover as a mechanic, Poe stations him with an old friend of his, a veteran pilot named Jarek Yeager (Scott Lawrence), who runs a starship repair shop on the Colossus with his crewmembers Tamara "Tam" Ryvora (Suzie McGrath), Neeku Vozo (Josh Brener), and Bucket. Along the way, Kazuda befriends starfighter racer Torra Doza (Myrna Velasco), and accompanied by BB-8, he keeps his true mission a secret from his newfound friends — after all, you never know who's a friend in the Outer Rim.

Star Wars Resistance is followed in production order by the seventh season of Star Wars: The Clone Wars.

General Hux's speech and the subsequent destruction of the Hosnian system indicate that Star Wars Resistance takes place around the same timeframe as The Force Awakens.

No Escape, Part I

General Hux's speech and the subsequent destruction of the Hosnian system indicate that Star Wars Resistance takes place around the same timeframe as The Force Awakens.

No Escape, Part I