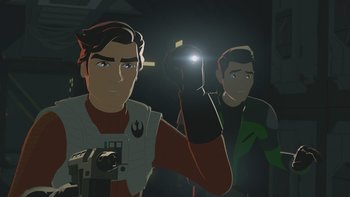 It's dawn on the Colossus, and Kaz is fast asleep when Yeager and Bucket approach him. Yeager tells Kaz to wake up, since he's got an early start ahead of him. In his sleep, Kaz requests five more minutes and rolls over, so Yeager has Bucket play a loud siren that jolts Kaz awake. Tam, working on the Fireball, is not sympathetic. Half-asleep, Kaz complains as he shuffles over to the caf machine, but can't get it to work as he repeatedly presses a button, wondering if it's broken again. Tam comes over, shoves him out of the way and presses the correct button before stealing the mug. Yeager says that he and Kaz will be leaving the platform for a day-long salvaging mission, and Tam is surprised as that wasn't on the work list.

Yeager pilots his shuttle off the Colossus, and tells Kaz he didn't actually say where they're going. Kaz takes a nap in the back. He's woken up again by sunlight later, and, properly awake, asks Yeager what it is they're doing. Yeager explains that someone wants to see him, and an X-Wing rises from the clouds. It's Poe, who proceeds to greet BB-8 over the coms (although Kaz thought he was being spoken to). Poe then tells Kaz he's got a surprise for him, and Yeager opens the shuttle's door as another X-Wing appears, flown by a red-and-blue astromech droid Poe introduces as CB-23. Kaz is nervous about jumping into the cockpit, since they're not docking to avoid attracting attention, because even though he learned sky-jumping at the New Republic academy, he's never actually done it. BB-8 eventually gives Kaz a push, and he lands in the fighter. Kaz straightens himself out and puts on the waiting helmet, saying hello to the droid, who responds she'd rather be flying with Poe. BB-8 then hops on-board Poe's fighter, and the two X-Wings fly off, with Yeager waiting in the shuttle.

Poe asks Kaz about Captain Doza potentially colluding with the First Order, and Kaz explains that they want to take over the Colossus, but he doesn't know why. Upon being asked why he didn't just send a transmission, Poe explains that signals can be intercepted, and also he wanted to fly somewhere. Kaz knows the feeling. They enter an asteroid field, and Poe shows Kaz a trick he calls a tailslide. Kaz tries it out twice, but doesn't manage to quite grasp it, nicking his fighter on asteroids. Poe tells him he's thinking too hard about the trick. Just then, Kaz picks up a distress signal, which Poe notes is coming from sector 6. The two head off to investigate, and find an old Darius G-Class freighter, which appears to have been attacked by pirates. There are several life signs aboard, and the two move to dock, with Poe hoping the survivors aren't any of the attackers.

Onboard, the ship is dark, and Kaz wonders what kind of cargo was being transported. Poe deduces, based on the cargo containers littering the hallways, that it was something alive. The two humans and two droids search a bit more before witnessing two pirates running down a cross hallway, fleeing from some kind of large creature that pulls them back. Kaz, sickened, realizes they've been eaten, and Poe responds that at least it's not them, wondering what kind of creature that was. Shortly thereafter, Kaz, Poe and the droids come under attack from Kowakian monkey-lizards, with Kaz having to pull one away from his face. Two of the irritating creatures manage to fill the hallway with smoke, leading Kaz and Poe to temporarily get separated as Poe chases after one that stole his blaster. As BB-8 and CB-23 have a lovely bonding moment, Kaz yells for help with the several lizards clinging to him. Kaz eventually gets help just as Poe returns with his weapon and fires at the ceiling to scare the lizards off, accidentally killing one on the ceiling in the process. Poe comments on how much he hates the creatures.

Searching deeper in the ship, CB-23 and BB-8 track a surviving humanoid life sign to a room next to a partially-closed door. Entering, Kaz finds an unconscious Mirialan woman inside of a crate, and carries her out of the room as he and Poe hear the giant creature approaching. It turns out to be a giant, mutant monkey-lizard, with both Kaz and Poe surprised that the creatures could get that big. They run, and shortly get split up when Poe, the only one with a blaster, lures the lizard away while Kaz, who is slowed down due to his burden, runs with the droids. Poe meets up with Kaz again just as he's put the woman down out of exhaustion, and helps carry her to their ships. As they depart from the freighter, they discover several pirate fighters have arrived, and fight them off. Kaz, dealing with one on his tail, finally pulls off the tailslide trick perfectly to rid himself of the pursuer. Poe and Kaz head back to Castilon.

Rendezvousing with Yeager, in his shuttle, Kaz brings the unconscious woman on board. Yeager is incredulous, suspecting that this is not a good idea. Poe tells BB-8 he'll see him again soon before leaving, and BB-8 waves CB-23 goodbye. When the woman wakes up, she punches Kaz in the face, and he hurriedly explains that she was rescued by some pilots, and that he and his boss volunteered to bring her to the Colossus. Yeager interjects that he didn't. The woman introduces herself as Synara, and claims to have been attacked by pirates. She's uncertain of how she'll be received on the platform since she has no ID, and Kaz promises that he and Yeager will sign her up.

At the Colossus' entrance, as Kaz goes to the window to sign Synara up, she's approached by a security droid, before Kaz waves it off, telling her everything is fine. Inside, Synara thanks Kaz, but tells him she'd like to be alone, and enters a lift. Yeager is suspicious, and tells Kaz that if anything goes wrong, all of this is on him. Kaz is confident it will work out fine. Inside the lift, Synara pulls out a comlink and calls her boss, Kragan Gorr, telling him that all of the other pirates who boarded the freighter were eaten, and that she's the only one who survived. Upon being told that, thanks to the kindness of unwitting strangers, Synara is on the Colossus, Kragan is pleased, seeing it as an unexpected opportunity. He tells her to blend in, as he'll have an assignment for her soon, before signing off. Synara smiles.