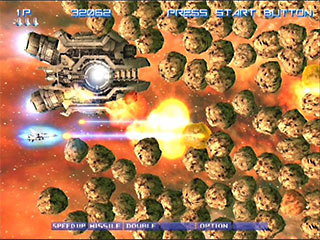 .
Princess Leia: You're not actually going in to an asteroid field?
Han Solo: They'd be crazy to follow us, wouldn't they?
Princess Leia: ...you don't have to do this to impress me.
— Star Wars: Episode V — The Empire Strikes Back
Advertisement:

In science fiction movies and TV, asteroids form a vast, hyperkinetic, obstacle-strewn Death Course: Enormous rocks spin like tops and whiz around all over the place, frequently even smashing into each other. Trying to navigate one is like asking a chicken to cross a busy Los Angeles freeway during rush hour: Small nimble spacecraft flown by skillful Ace Pilots (i.e, the protagonists) may be able to slalom through without getting reduced to space dust, but any pursuing enemy fighter ships will get picked off one-by-one by giant, malevolent space boulders. Any capital ship who can't just blast a path through them with its Wave-Motion Gun will have to rely on their Deflector Shields to bounce the rocks off. This makes it a good option to escape the guns of a pursuing capital ship.

It's unfortunate that Real Life asteroid fields, while they do exist, don't have such a flair for the dramatic. Real Life asteroids are strewn much farther apart from each other; so far that the chance of even seeing one (let alone crashing into one) is pretty much nil. This is because a truly violent asteroid thicket, in Real Life, would simply dash itself to bits in a short period of time. Also, due to gravity, even dust will be attracted to itself; larger rocks would gravitate towards each other even faster, and the whole asteroid field would eventually gather into a few fairly solid clusters — in fact, this is fairly close to the going theory of how planets form from clouds of dust and rocks. Scientists have sent space probes through our solar system's main asteroid belt for decades, including one — Dawn — that has studied bodies within it — and haven't lost a single one in the process. While obviously no first-hand data is available about asteroid fields in other star systems, everything we know about physics tells us that they'd probably differ little from the ones in our own solar system and would be nothing like typical sci-fi depictions.

Conversely, planetary rings are (relatively) much more sparse in fiction than they are in real life. Voyager 2 flew through Saturn's G ring — one of the fainter rings — once, at an angle, and there was "lots of evidence of micrometeroid hits"

on the quite small 4-meter diameter probe, and the Cassini spacecraft used its antenna as a shield when crossing the same ring or the space between the rings and the planet during its mission at Saturn. The thickness of the rings is also surprisingly variable, ranging from under 10 meters to over a kilometer. However, aspiring SF writers should know that these planetary ring systems are mostly made up of ice (99% of the rings' content) and rocks 0.01 to 10 meters across.

A Sub-Trope of Artistic License – Space and Sci-Fi Writers Have No Sense of Scale.

Compare Space Clouds, a trope about the similarly unrealistic portrayal of nebulae in fiction; Conveniently Close Planet for if an Asteroid Thicket could be considered "frustratingly close asteroids". A spaceborne equivalent to an Aerial Canyon Chase will take place in one. If there are Asteroid Miners here, they're going to have hazardous lives.

May be justified if the asteroids are actually a Shattered World left over from a recent Earth-Shattering Kaboom.

Blasternaut and G.C. rescue Spot in an asteroid field.

Blasternaut and G.C. rescue Spot in an asteroid field.