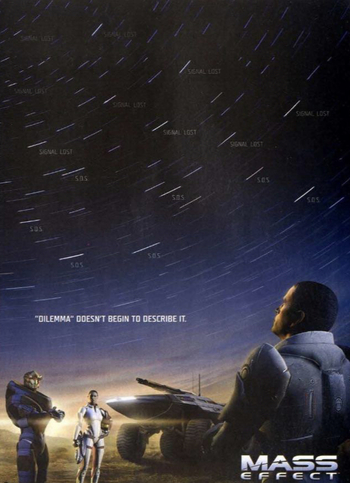 This is a common opening found in Sci-Fi, Horror and Sci-Fi Horror. This refers to the plot structure wherein the heroes are summoned to respond to a distress call, or occasionally, a non-emergency yet still foreboding request for assistance from an expedition. Equally often, the heroes are investigating the abrupt stoppage of all communications from the site.

The most common response? Send in the Search Team.

Of course, when our plucky heroes get there, Late to the Tragedy, they find a Ghost Ship or Derelict Graveyard either devoid of any signs of life at first, or filled to the brim with horrifically mangled dead bodies. Sure enough, the folks who sent out the distress call are all dead, thanks most often to the Monster of the Week, though the usual suspects often include The Corruption (and in general, The Virus) or just getting a Face Full of Alien Wing-Wong. Apparently, no matter how much Faster-Than-Light Travel is, answering a distress call Traveling at the Speed of Plot is never fast enough. Also, you can expect their engines to give out/a storm to hit and make leaving impossible. Cue the mission becoming a Deadly Road Trip as whatever killed the sender starts picking them off.

While a distress call filled with screams and ominous roaring in the background can get a scifi horror story off to a nice start, a sudden stop to all communications places more emphasis on the horrific speed with which the killer alien/virus/whatever managed to off everyone. Some stories even make it a cyclical set up, with the surviving rescuers sending out their own ominous distress call. To summarize: something has Gone Horribly Wrong, and the heroes must find out what before it gets them too.

There are several variations to the Distress Call:

Send in the Search Team is one plot based around this. Late to the Tragedy often begins In Medias Res.

help me, I'm being held prisoner in a wiki factory