Recap / Star Trek S1 E3 "Where No Man Has Gone Before" 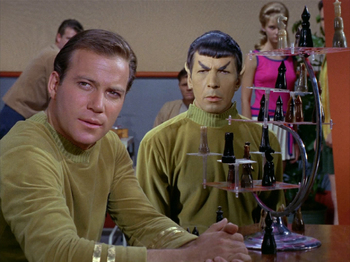 What is up with those uniforms and Spock's eyebrows?
Advertisement:

The second pilot for the Original Series, produced after NBC rejected "The Cage".

Kirk, Scotty, and Sulu were introduced here, along with Spock as we know him (he was in "The Cage", but with some different personality traits). McCoy and Uhura were introduced in the first regular episode, "The Man Trap", along with Yeoman Rand, while Chekov didn't show up until season two (though Star Trek II: The Wrath of Khan implied that he was somewhere on the Enterprise as early as "Space Seed").

The USS Enterprise, near the edge of the known galaxy, encounters an old-style ship recorder from the SS Valiant, a ship that disappeared 200 years ago in the same mission to penetrate the "galactic barrier" as the Enterprise. Spock interprets the recorder's message which indicates that the captain of the Valiant ordered a self-destruct on the ship after trying to access information on humans with extrasensory perception (ESP). The Enterprise's newly-arrived psychiatrist, Elizabeth Dehner, comments on the abilities of humans with high ESP ratings - abilities which don't normally go beyond mild precognition. Forewarned, the crew prepare to encounter a magnetic storm at the edge of the galaxy.

The Enterprise is crippled by a mysterious electric field, damaging its engines, killing nine crewmen and shocking both Dehner and Lieutenant Commander Gary Mitchell. Mitchell is taken to the infirmary where he has developed strange silver eyes. Being an old Academy friend of Kirk, the captain personally attends to Mitchell only to find that he has been speed-reading through the ship's library at the blink of an eye. Kirk and Spock consult the ship's records to find that Dehner and Mitchell scored the highest ESP ratings. Mitchell slowly begins to develop strange powers such as reading minds, telekinetic skills and clairvoyance. While Dehner is taken in by Mitchell's transformation, Spock recognizes that Mitchell is becoming colder, more ruthless and will develop powers beyond their imagination. Spock recommends that the Enterprise head to the planet Delta Vega where a lithium-cracking station could help repair the ship's engines. Bereft of humans, Mitchell could be marooned there. Either that or execute him. Kirk, torn between his old friend and what he has become, struggles with the decision.

Mitchell becomes more confident with his abilities as the Enterprise reach Delta Vega, commenting that he could read Kirk and Spock's minds, knowing what they have planned. Nevertheless, they succeed in incapacitating him for a moment and bringing him to Delta Vega, keeping him in a forcefield cell. Kirk continues to struggle with what to do with Mitchell, even as he becomes stronger while Dehner continues to speak of the possibilities of a new form of human. While the Enterprise is repaired, Mitchell escapes and kills Lieutenant Kelso and incapacitates Kirk and Spock. He takes Dehner with her to the hills of Delta Vega, revealing that she too has developed the silver eyes, and therefore will have the same abilities.

Kirk is woken by the chief medical officer and goes after the pair. Mitchell demonstrates his powers to Dehner by creating a garden from nothing and remarks on what the two of them could do. He senses Kirk approaching and sends Dehner to meet him. Kirk and Dehner have an argument on what Mitchell has become. Dehner tries to defend Mitchell but Kirk appeals to the psychiatrist in her to recognize what Mitchell has become. Mitchell himself appears and easily brings Kirk down. Dehner sees how Mitchell has become inhuman and attacks him with her own powers. He retaliates and deals her a blow but not before his power is sapped and Kirk attacks. A fistfight ensues and ends with Mitchell buried in the grave he had prepared for Kirk. Dehner shows remorse for her actions in her dying breath as she passes, leaving Kirk alone to return to the Enterprise.

"Captain's log, stardate 1313.8. Add to official losses, Dr. Elizabeth Dehner. Be it noted she gave her life in performance of her duty. Lieutenant Commander Gary Mitchell. Same notation(...)He didn't ask for what happened to him." notes Kirk, prompting Spock to say that he felt sympathy for Mitchell too. Grimly amused, Kirk comments "I believe there's some hope for you after all, Mr. Spock."

Where No Trope Has Gone Before