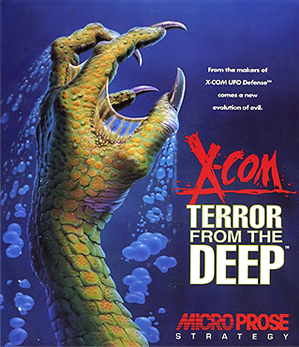 X-COM: Terror from the Deep is the '95 follow-up to X-COM: UFO Defense (or Enemy Unknown, depending on your nationality) which tries to change as little as possible. After their last failed bid to invade, the aliens on Cydonia sent a message...to the oceans of Earth. Turns out they visited Earth a long time ago, and then never left due to crash-landing. Now, they're upset that humanity had the audacity to deny their space-borne brethren the rite of conquest, so they're picking up where the war left off. They're still UFOs. Just underwater.

TFTD has the look of a "reskin" or an expansion, but is an actual sequel to UFO Defense. It has the same game engine, but the difficulty and map size are increased, making it much lengthier. There are also UI improvements: You can reserve time to kneel as well as shoot, and it remains set for the rest of the battle (or until you un-toggle it), streamlining the tactical phase significantly. Most of these features were bundled into the open source clone of UFO (OpenXCom) in 2010.

UFO cares about you. It wants you to have a good time. There is a bit of cheating involved (reaction time preference), but overall, it treats you nicely if you follow the house rules. Terror from the Deep is another ball of wax. That reaction shot will always hit you, and you won't get a chance of surviving. Chrysalids can fly now. Particle weapons (Laser equivalents) have ammo requirements. Aliens holding one-handed Blaster Launchers. Certain weapons will function underwater but not on land. Multi-part Terror Missions. Only a Lobster Man Commander can get you the game-ending research, rather than an easier Aquatoid or Gillman. Terror from the Deep will put hair on your chest. It is a one-sided alien mosh pit of death and gloom.

Firaxis considered remaking Terror from the Deep, but decided to release Enemy Within and XCOM 2 instead. The Stinger to XCOM 2 hinted that a remake of classic TFTD was still a possibility; however, it looks like they decided to explore Apocalypse territory with Chimera Squad instead. Or you can just play the new XCOM with an aquarium in front of your monitor.