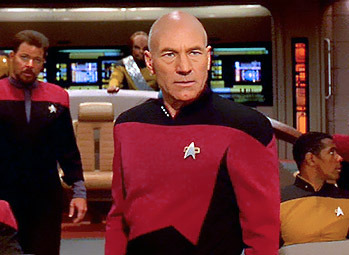 "Both parties of the Edit War are within weapons range, sir."
"Very good, Mr. Worf. Attack pattern Banhammer—engage!"
"O Captain my Captain! our fearful trip is done;
The ship has weathered every rack, the prize we sought is won;
The port is near, the bells I hear, the people all exulting,
While follow eyes the steady keel, the vessel grim and daring..."
— "O Captain! My Captain!" by Walt Whitman, on Abraham Lincoln
Advertisement:

The Captain — from the Latin caput, meaning "head" — is in charge. The Commanding Officer of The Squad or the Command Roster. It's good to be the Captain. Whether this character is the Mission Control or actually working in the field, he/she is clearly the one running things. Any Cool Ship must have The Captain — no matter whether it's a Cool Boat, a Cool Starship, or a Cool Airship. He is expected to stay with that ship no matter what. And any Captain must have a Captain's Log.

The Captain will almost always hold said actual rank, even if their performance would allow the Captain to move up the chain of command. (Also true in non-naval branches of the armed forces (Army, Marines, etc.), since Captain is the highest of the Company Grade ranks, i.e. the officer ranks that participate in actual combat. From Major onward, officer ranks are more administrative.) This is sometimes confused by the naval convention that anyone in command of a given ship is referred to as "captain", no matter their rank (for most vessels smaller than a cruiser, the Captain is Commander, and smaller vessels like minesweepers can be commanded by a Lieutenant) — and all other "captains" receive a promotion for the duration of their stay. Horatio Hornblower actually becomes a captain for the first time while still a Midshipman as he is put in charge of a vessel that was captured in battle.

Regardless of actual rank held, however, under most modern and historical laws the captain of a naval vessel is the Omnipotent Being on it when out in sea, since it is his personal responsibility to return to land with his crew complete and his ship in one piece. And not even the God-Emperor of the Universe can give orders past him in this case.note  Before radio and other long-range communication methods were invented, it was basically impossible to give a captain orders while he was at sea. Thus the importance of selecting captains who are very capable of independent judgment, who bear sole responsibility for their decisions. To this extent, portrayal of The Captain as a Reasonable Authority Figure, an Officer and a Gentleman (sometimes in contrast with officers from other military branches) is undoubtedly Truth in Television.

Assuming he is a part of the main cast, The Captain (often along with his senior officers) is often depicted doing things that really should be delegated out to lower-ranked, more expendable personnel in order to have some tangible things to do (unlike in real life where officers are often doing lots of important but boring "office work"). However, since there's no drama in conferences, meetings, and paperwork, most writers would rather have him behave unlike a real captain and hope no one notices. Often his participation in minor issues serves as Character Development, so that when a grave decision has to be made, he will be able to say "I Did What I Had to Do" without alienating the audience in the process.

Sometimes, however, The Captain is instead a background Reasonable Authority Figure, while the narrative focuses on people under his command. It's a road less taken because it's dramatically tricky to carry off, at least in a visual medium. Star Trek: The Next Generation tried a form of it in the early days, leaving Picard on the bridge and having Riker be the 'field guy'. While it made sense, it just didn't work in regards to drama. Indeed, this approach works best when The Captain is considerably older and noticeably unsuitable to physical action for reasons such as age or infirmity. This leaves a younger, less mature character to act as the "deputy" who is allowed to run around, get in and out of trouble, make mistakes, get involved romantically, learn valuable lessons, discover new things about himself, and do all sorts of things that The Captain would have already done to be where he is today, the general perception being that by the time a character reaches the point of becoming The Captain, his character has little room left for development. This approach is occasionally taken in anime but in many such cases, The Captain is often fated to die sometime before story's end so that the younger character may truly develop into a mature character and live up to the hope his mentor had for him.

A median approach between the two is to imply that available personnel are in a relatively small number, thus forcing and justifying the presence of the Captain and senior officers in field situations, or to outright establish that The Captain's skill and experience are just that indispensable due to Authority Equals Asskicking, thus making him the best one to handle the Monster of the Week.

Compare The Hero, The Good Captain, Supporting Leader, Commanding Coolness, Colonel Badass, Majorly Awesome, Captain Superhero. Contrast Da Chief. Do not confuse this with the Captain in Commedia dell'Arte, who's a Miles Gloriosus.

Also not to be confused with the German live-action film of the same name, whose protagonist is decidedly not this trope.

This trope concerns captains of ships and vessels of all kind and is almost exclusively a Navy trope. A Captain in the army is a lower-level officer who might at most command an infantry company of 120-160 men, or a tank squadron, or an artillery troop. He is higher than a lieutenant but lower than a major, and the rank equates to a Navy lieutenant (a few grades below a Navy captain). An Army captain might be viewed as a Rupert

with five or six years practical experience, and it is the highest level to which a British Army officer is automatically promoted: promotion to higher ranks is by competitive selection.