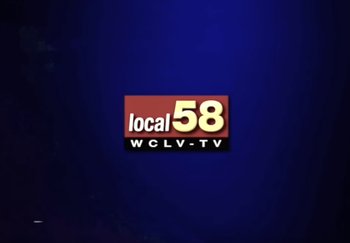 WE BEGIN OUR BROADCAST DAY
WE SEND SIGNALS TO OURSELVES
THRU THEIR DOMAIN
DID WE REALLY BELIEVE
THEY WOULDN'T ADD THEIR OWN
Advertisement:

ＬＯＣＡＬ５８ is a Web Original Analog Horror anthology series by Kris Straub of Chainsawsuit fame, and a spin-off of his story Candle Cove, centering around the mysterious TV channel that the show aired on. The videos, which are presented in the form of found footage and emergency alerts from the titular (fictitious) US station WCLV-TV, paint a picture of a station and broadcast area where things are wrong, but it's not entirely clear what. Wild Mass Guessing abounds.

The popularity of these videos led to numerous imitators, spawning the horror genre of Analog Horror.

Cadavre in "A Grave Mistake"

Our hero searches for his lady friend inside of a moonlit graveyard.

Cadavre in "A Grave Mistake"

Our hero searches for his lady friend inside of a moonlit graveyard.