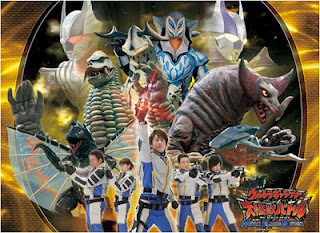 Ultra Galaxy Mega Monster Battle is the first season of the 24th entry in the Tsuburaya Productions' long-running Ultra Series. The second season is subtitled Never Ending Odyssey or NEO.

40 years after the events of Ultraman Mebius, when humans have paved their way into space, the crew members of a delivery company named ZAP Spacy land on a ZAP-owned planet named Bolis that soon revealed that monsters have claimed the planet for their own. There, they discover Rei, a half-human, half-Reiblood with the power to control monsters, who joins their crew in their effort to stop the rampaging monsters, as well as the dark entity known as Reiblood whose power Rei shares. The series is filled with a plethora of kaiju from Ultraman series old and new.

The original series consisted of 12 episodes and was continued in a 13 episode Sequel Series, Mega Monster Battle: Never Ending Odyssey. In 2009 it received a film epilogue titled Mega Monster Battle: Ultra Galaxy Legends, which also served as the start of a new era in the Ultra Series.