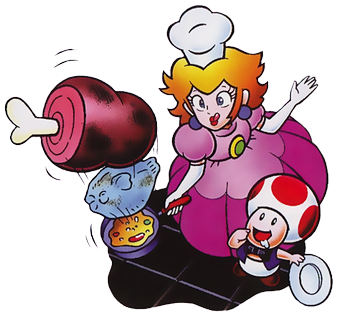 "What do you mean I'm not properly dressed for this job?
I've got the hat, haven't I?"
Mort: I'd quite like to see a real king. They wear crowns all the time, my granny said. Even when they go to the lavatory.
Death: THERE IS NO TECHNICAL REASON WHY NOT. IN MY EXPERIENCE, HOWEVER, IT IS GENERALLY NOT THE CASE.
— Mort
Advertisement:

This is not literally true; in Real Life, the fancy dress is reserved for the ceremonies and the portraits. It was a popular belief, however, since ceremonies and portraits used to be the only places commoners got to see royalty. Formal dress is designed to do to the human eye what trumpet Fanfares do to the ear.

The Ermine Cape Effect does not require an ermine cape, or even the fur of the ermine. The ermine cape is so common, and such a clear sign of royal or noble status, this trope is named for it. What it does require is that if, say, a young countess is wearing something like an ermine cape, she is wearing it even while doing activities which would be impractical in that garment, but it works just fine.

This effect is deliberate, which is why it is used even by writers who know it doesn't hold in Real Life. It just doesn't seem right if the king dresses like a slob while he is being his royal self. How can you put your faith in the divine right to rule when the king walks around in a tattered bathrobe and fuzzy slippers? No, the king must create the image of majesty whenever possible. The Woman Wearing the Queenly Mask must do it even more.

So, any time a lot of commoners would get a good look at the king or queen, either through a public appearance or a portrait that would last for ages to come, the royals and nobles put on the works. Just browse around The Other Wiki for European nobility and royalty.

This leads some to believe being royalty is primarily about wearing pretty clothes. It is a major factor in the mysterious appeal princesses have. This is also why the Rebellious Princess will get rid of her fancy clothes when she is rebelling — she is trying to reject her status, and go unrecognized if this is desired (if people think of the princess as her regalia more than her face). Yet these new commoner clothes somehow become more beautiful, especially if the wearer is Princess Classic.

Because royalty often hold military ranks (earned or honorary), this can overlap with Bling of War.

With royalty becoming less distant these days, this is largely becoming a Discredited Trope, save for nations that still have absolute monarchies. Tragically, in most modern European monarchies such as Monaco and Britain, the royalty seems to generally favor the Western suit-and-tie businessman look (although one certainly cannot deny that those suits are very often very sharp)note The British royals are sort of a bad example, since the men are often in their military uniforms—which they all earned, thank you very much—and the women are known for interesting fashion choices (particularly the Duke of York's daughters Eugenie and Beatrice). Nevertheless, the men are frequently found in suits—Prince Charles in particular seems to like the look, as does the Japanese Emperor, the King of Jordan, and the King of Morocco (although he'll occasionally don a traditional djellaba). In the Gulf Arab monarchies, the custom is to wear traditional dress (which even when luxurious looks surprisingly plain and simple for a region famous for Conspicuous Consumption), although the ambassador to a Western country might wear a suit. The kings of Bhutan and Cambodia generally wear traditional dress, while the King of Thailand seems to prefer his blinged-out military uniform.

In fiction, this means that any royalty is as likely as not to wear fancy clothes as everyday wear, no matter how impractical, although it is rarer these days. Is still commonly seen in Decadent Courts.

It should be noted that even when an ermine cape is worn, this trope rarely overlaps with Fur and Loathing.

Wearing one's hair in Regal Ringlets style, or its Japanese derivation Ojou Ringlets, can be a subtler form of this.

When a royal person wears otherwise unassuming clothes but retains a crown or similar garment to mark them as royalty for the viewer (even when it doesn't make sense in-universe), this is Dress-Coded for Your Convenience instead. To tell them apart, check if other characters who don't already know the character is royalty notice the regalia.

Now although this trope is strictly about royalty and nobility, it should be noted that anyone who could afford to have his or her portrait painted would put on the works. Even the poorest naval clerk

begged or borrowed the fanciest outfits they could find because it was Just Not Done to sit for your portrait wearing your day clothes. In medieval times people rich enough would probably wear the most expensive and ostentatious thing they could manage as much as was possible, as you were expected, even required, to maintain your place in society by proving you belonged there through displays of wealth.

Sister Tropes, all of which this trope makes use of, include:

Contrast Royals Who Actually Do Something, Modest Royalty, Impoverished Patrician, Simple, yet Opulent.