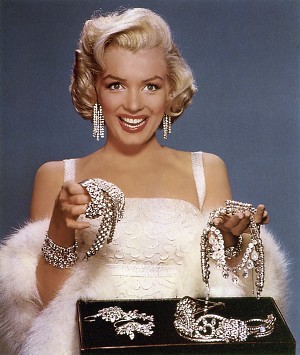 Say hello to Marilyn and her many, many good friends.
"Men grow cold
As girls grow old
And we all lose our charms in the end
But square-cut or pear-shaped
These rocks don't lose their shape
Diamonds are a girl's best friend"
— Gentlemen Prefer Blondes
Advertisement:

When Jewelry is shown in fiction, it's to pretty up a scene. Pretty much like Real Life, since wearing jewelry is almost always to enhance appearance and/or to show off wealth.