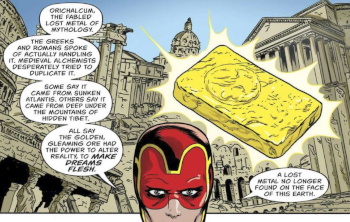 Just one of orichalcum's many forms.
Orichalcum is a legendary precious metal that was mentioned by Plato as used in Atlantis. Orichalcum appears in many other places in classical Greek and Roman writings (for example, the Homeric Hymns assign gold and orichalcum ornaments to Aphrodite) but it's the Atlantis reference that it's remembered for.
Advertisement:

It has since been commonly used in fantasy literature and games as a type of Unobtainium. The term is Greek for "golden stone" and originally meant "mountain copper" or "mountain metal", though nobody is sure exactly what it was supposed to be. Possibilities range from an alloy of normal metals to a completely fantastic material, though the most common perception is that it is brass.note Brass is an alloy of copper and zinc that superficially looks like gold. Supported by, among other things, the discovery of a 6th century BC Greek ship carrying ingots of brass.

Due to pronunciation changes, this word sometimes gets reborrowed as "orihalcon", particularly with works of Japanese origin. If you're curious why, in Ancient Greek the word was pronounced something like "ore-eh-kal-kos", which is reasonably similar to how it's pronounced in modern English, but in modern day Greece it's pronounced more like "oriy-khal-kos", with the "kh" in the middle being a cross between a K sound and a H sound. If you speak Scottish or German, it's the "ch" sound in loch or acht. Japanese borrowed the word based on this modern Greek pronunciation, but it further became muddled into オリハルコン orihalkon, which unfortunately is different enough translators often fail to recognize it as orichalcum. (If Japanese borrowed the word based on English instead, it'd probably be spelled オリカルカム orikalkam.)

Orichalcum is frequently thought of as a do-anything magical super-material when really it's just a type of brass.

Orichalcum is frequently thought of as a do-anything magical super-material when really it's just a type of brass.