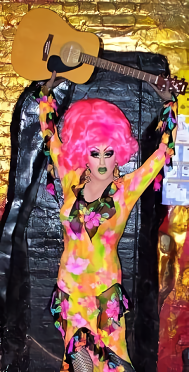 Drag queens are performers who dress as oft-exaggerated caricatures of gender to entertain. While the archetypal drag queen is a man dressing as a woman, they can just as easily be transgender women, non-binary, cis women, etc. Unlike Transgender women and Crossdressers, men who are drag queens wear women's clothing only on special occasions. They are usually Camp Gay men who sometimes like to get that little bit more flamboyant by dressing up as a tornado that's just rushed through a mountain of candyfloss and glitter. They can get dolled up for a variety of reasons: paid entertainers, runway models, cosplayers, etc. Many a Gay Bar features drag queens as regular performers, though a select few have gone on to mainstream success as well.

Drag queens on TV are usually sharp-tongued and witty, matching the stage personas of real-life professional stage performers. When they're not the main character themselves, they may provide the hero with world-weary advice or help put forward a "just be yourself" Aesop.

Many cultures around the globe have a theatre tradition of men dressing as women, such as the UK's pantomime dames

, and Western comedians with a female persona like Barry Humphries (Dame Edna) and Tyler Perry (Madea). However, these are usually heterosexual men performing for general audiences, whereas drag performers are specific to LGBT+ culture, performing at gay bars, Pride festivals, and other queer-centric events, and many take part in community activism outside of performing.

Note that it's not universal for a drag queen to be campy and larger than life. In general, they can be divided into at least three broad categories:

. The counterargument is that drag queens really subvert and deconstruct gender norms by making fun of traditional femininity, thus helping to free both men and women from stereotypical expectations.

The Distaff (ahem) Counterpart is the Drag King — most often a woman, usually a Butch Lesbian, performing masculinity with levels of exaggeration similar to a Drag Queen. They'll bind their breasts (if necessary), pencil in or glue on a beard, and either keep their hair short or cover it under a hat. And then stuff a sock in their pants. Kings tend go for a dapper, thuggish, cowboy, or rocker persona.

Some drag performers also happen to be transgender, but one doesn't indicate the other. Those who are will still ham it up in their performances. As RuPaul's Drag Race contestant Monica Beverly Hillz put it, "Trans is who I am, drag is what I do."

Drag queens with their own pages