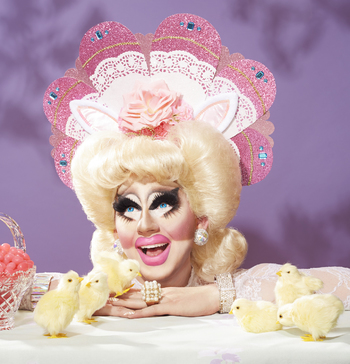 Trixie is perhaps best known for appearing on the seventh season of Ru Pauls Drag Race, where she finished in sixth place after a prior elimination four episodes earlier. She later returned to the series as a contestant for its third all-star season in 2018.

Despite her relative lack of screentime on the show, Trixie quickly became one of that season's breakout stars, which led to her (and fellow season seven alumnus Katya) hosting the web series UNHhhh on WOW Presents.

In conjunction with her drag career, Trixie is also a musician, having released her debut studio album Two Birds in May 2017. The release was a commercial success, especially compared to the musical output of other Drag Race alumni, peaking as high as #2 on the iTunes US album chart the week it became available. In 2019, she launched her own makeup brand called Trixie Cosmetics which emphasizes bright colors and toy-like packaging designs.

A documentary, entitled Trixie Mattel: Moving Parts premiered at the Tribeca Film Festival on April 25, 2019. It chronicles a few months in Trixie's life, around the time of her Drag Race: All Stars season.