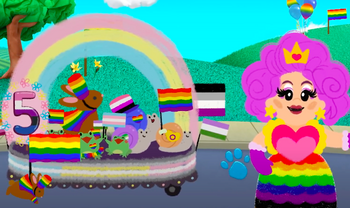 ♫ Love is love is love you see, and everyone should love proudly! ♫
An LGBT+ Pride Parade is going on. Maybe it has little or nothing to do with the plot, being there simply there to spice up the background of whatever the protagonists are doing (any show with a Cast Full of Gay is bound to do a Pride episode at least once). Or maybe it's a major part of the episode. For example, one of the major characters could be helping organizing the whole thing or organize protests against it. Or there could be heated debates on what minorities and organizations should and shouldn't be included. Hilarity may very well ensue if one or both sides resort to Activist Fundamentalist Antics.
Advertisement:

The parade may be portrayed as a stand-alone event, or be given context as a part of a larger festival. In the later case, it often includes tie-in events at the gay bars around the city, concerts, and seminars on issues important to the LGBT+ community.

In most cities, Pride takes place in the month of June as that is when the Stonewall riots occurred. But some locations have it earlier or later in the year if the weather in June isn't friendly to a large outdoor event. In the United States, for example, a few southern and western cities hold Pride in October since the heat isn't so oppressive, and to commemorate National Coming Out Day on the 11th.

Compare Sex Is Good, Ethical Slut and Brains and Bondage. Contrast (or compare, depending on the tone of the work) Sex Is Evil, Depraved Homosexual, Bondage Is Bad, Straw Loser and Internalized Categorism.