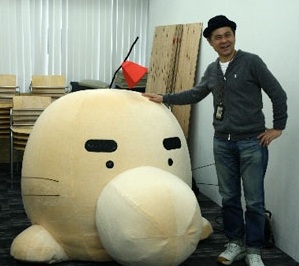 tHat's itOi On tHE RighT, ZOOm.
"Being free does not lead to decadence. It brings out potential."
— Itoi, in a 2011 interview with David Meerman Scott

Shigesato Itoi (糸井 重里, born November 10, 1948) is a Japanese essayist and copywriter whose works are widely considered to have had a defining influence on modern Japanese culture. He's dabbled in pretty much everything at some point or another over the past thirty years or so — he's done books, he's done songwriting, he's done websites, he's done voice acting, he's done film, he's done television, he's done day planners... The man is an endless font of variety, really, and Japan loves him for it. He is perhaps most famous as an advertisement copywriter and designer, and had a hand in a number of Japan's most famous ad campaigns in the modern era.

Of course, that's not what he's known for in the western world. No, the west knows him better for something that to him and to Japan was little more than a little experiment in storytelling he did on the side. Around here, he's best known as the brilliant mind behind the Mother trilogy of Nintendo video games, namely EarthBound Beginnings, EarthBound and Mother 3. He's a good friend of Shigeru Miyamoto, Hirokazu Tanaka and the late, great Satoru Iwata (who singlehandedly reprogrammed EarthBound from scratch midway through development, rescuing the entire project when all seemed lost), he served on the board of Nintendo subsidiary HAL Laboratory for a while, and he is an occasional participant in the Iwata Asks interview series. Other video game endeavours of his include bass fishing video games for the Super Famicom and Nintendo 64 (he was really into bass fishing in the late 90s) and a health diary for Nintendo DSi.

In 1998, he established the Hobo Nikkan Itoi Shinbun

(Pretty-Much-Daily Itoi News, commonly called Hobonichi), a strange news site-hybrid themed around the idea of brightening peoples' days. It's partially a news site, but its biggest draw is its status as the home of his essays and thoughts on life, living, philosophy and his dog, and interviews with interesting people. On that note, he really loves interviewing people — his interviews never fail to be long and interesting and he's filled multiple books with them. This is pretty much why Iwata sometimes got him to do important Iwata Asks interviews when Iwata was still alive — because he's really, really good at it.

, which is quite the interesting read if you're versed in Japanese. It's pretty easy to tell whenever he mentions MOTHER, because the title is always written in English.

A small sample of things Itoi has worked on