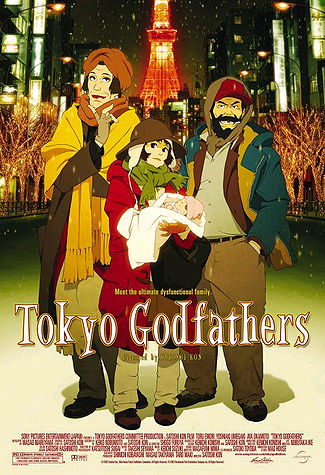 Tokyo Godfathers is a 2003 Anime movie directed by Satoshi Kon; the film is heavily based on the 1913 novel The Three Godfathers about a trio of bandits who discover a foundling. This dramatic comedy is a stark departure from Kon's more mind-bending works, but it still contains his atmospheric touch, keen social commentary, and insight on the human condition.

Three homeless people — Gin (an alcoholic), Hana (a transgender woman) and Miyuki (a teenage runaway) — find an abandoned baby while digging through trash and spend Christmas Eve looking for its missing parents.

Contains a lot of Contrived Coincidences (miracles, really, but always within the realm of possibility), but that's kind of the point. In the meantime, viewers get a glimpse of a side of Tokyo that is rarely seen in anime.

Sorry, Miyuki, but the other non-Spanish speakers are just as much in the dark as you are!

Example of:
Reality Has No Subtitles

Sorry, Miyuki, but the other non-Spanish speakers are just as much in the dark as you are!