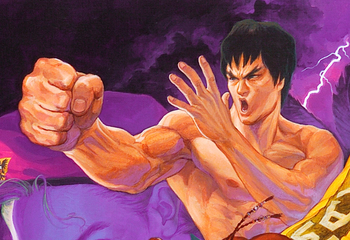 You can practically hear the Funny Bruce Lee Noises coming from this picture.
The figure stepped forward into view, trodding carelessly on top of the downed Dragons as he went. He looked a lot like Bruce Lee, but with large aviator shades, and tattoos of dragons covering his arms and chest.
— Same Difference, "Is This a Date?

When you want a badass for your series, who better to use than the Dragon himself? Members of this trope love flashy, unrealistic moves and may have a penchant for high-pitched screams like "WATAAAAA!" and other sounds while fighting. One-inch punches, bowl-cuts, yellow jumpsuits and nunchaku are also common, despite Lee himself devoting his life to stripping away such extravagances, mysticism, and inefficient techniques in martial arts.

Members of this trope may have honed their bodies to superhuman levels through relentless training, Charles Atlas style. May have a penchant for not wearing a shirt and stretching out their ribs to flaunt their well-deserved muscles. They'll also have a similar name, either with Lee, Li, and/or a reference to the word for dragon, Long.

Character is often a Badass Normal, while providing the same kind of humor as an Elvis Impersonator.

Lesser seen but a still common sub-trope is the Jackie Chan clone; a mop-haired, laid-back fighter who tends to incorporate either drunken boxing or the environment in his fighting style. These are almost always based on Chan's performance in Drunken Master.

In a Japanese work, this trope may occur because All Chinese People Know Kung-Fu. A Sub-Trope of Fountain of Expies.