Warning: Unmarked spoilers for Mortal Kombat 9. Read at your own risk. 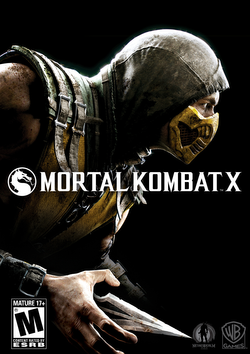 "Who's next?"
"We thought the long nightmare was over. But it turns out that Shinnok had been manipulating events: Shao Kahn's invasion... His death... All part of Shinnok's plan to escape the Netherrealm, and resume his war on the Elder Gods."
— Johnny Cage, story mode opening
Advertisement:

Mortal Kombat Xnote officially the title is pronounced as the letter X, but it has a double meaning, as it also serves as the tenth mainline entry of the series is the tenth official Fighting Game entry in the Mortal Kombat franchise. It was released on April 14, 2015, for the PlayStation 4, Xbox One, and PC. Releases for the PlayStation 3 and Xbox 360 were scheduled, but were cancelled in August 2015. It's set after the events of Mortal Kombat 9, and spans the course of 25 years continuing the Continuity Reboot from that game. Telling the story of what went on after Shao Kahn's defeat and the fallout of it in Outworld and how it affects both the Netherrealm and Earthrealm with newer warriors fighting for the sake of their dimensions.

At its core, Mortal Kombat X retains the gameplay mechanics featured in the 2011 game, being a 2½D fighter with a super bar that allows for enhanced special moves, Combo Breakers, and X-Ray Moves. Additions to the formula this time around include interactive stage elements—used for both offense and mobility—in the vein of NetherRealm Studios' previous title and three variations per character, each style granting different attributes and abilities in battle, reminiscent of Samurai Shodown's Slash/Bust system, or the "isms" in Street Fighter Alpha 3 or the Groove System in Capcom vs. SNK 2: Mark of the Millennium 2001.

A mobile, namesake tie-in game was released on iOS on April 7, 2015 and on Android on May 5, 2015. Like with the Injustice games, players assemble tag teams of 3 fighters. The fighters take the form of cards, and can be upgraded by gaining experience, equipping artifacts upon them, and teaching them new attacks. This version takes every variation and creates a new character upon each of them. With the announcement of 11, it's been confirmed that there won't be a tie-in game with it, and that instead this game would be upgraded with new characters and renamed Mortal Kombat.

An expanded edition was released in 2016 titled Mortal Kombat XL, which contains the base game and all the downloadable content in one package.

Beginning in January of 2015, DC published a weekly digital comic

of the same name, which is set during the 25-year time gap between Mortal Kombat 9 and MKX.