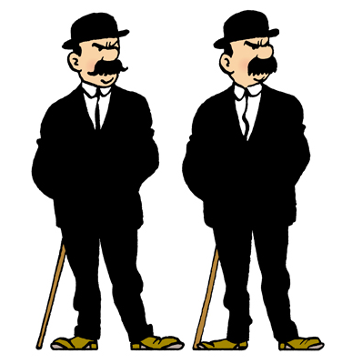 Detectives Thomson and Thompson (unrelated). Notice their ties and moustaches.
"They are a unit; they even share the same name."
— Description of MasterBlaster, Mad Max: Beyond Thunderdome

Two (or more) characters who, for all intents and purposes, act as one character, always appear together and are never introduced individually. Even if there are frequent disagreements between the members of The Dividual, they will act as one entity as soon as the Plot moves on.

There are two types:

Typically, The Dividual is a background character or part of an Ensemble Cast but another frequent setup is something similar to an Adventure Duo where the two main characters form a dividual. This setup heavily restricts the available plots as the two main characters must always act as one in relation to other characters. In those cases, the work's name will often be simply the characters' names, "Alice and Bob"-fashion.

Might overlap with Heterosexual Life-Partners, Those Two Guys and/or Those Two Bad Guys. Single-Minded Twins is a subtrope. Compare Literal Split Personality, Hive Mind and I Am Legion. If the members of The Dividual are twins, expect any number of Twin Tropes (especially Single-Minded Twins) to be in place (although it's also possible for Polar Opposite Twins to be a Syndividual). Sometimes, The Dividual will exhibit Twin Tropes despite the fact that its members are not twins. For a romantic couple that is often referred to by a single name, see Portmanteau Couple Name.