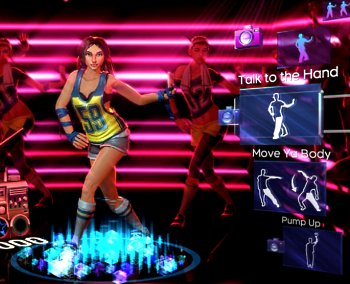 Sass to the beat.
Advertisement:

Dance Central is a launch title developed by Harmonix for the Xbox 360's motion controller, Kinect. This dancing game involves moving your body according to the indicators, but thanks to the sensors on the camera, it can read your whole body. This both adds more movement required for the player, but also means the moves had to be simplified compared to other dancing games to avoid physical strain.

The soundtrack is a bit narrower than other dance games, where most of the songs have a variety with the 2000s, but the songs from The '80s and The '90s are almost all hip hop, likely to fit with the urban dancing mood of the game.

The game also lacks local multiplayer, although it doesn't prevent friends from dancing along with you.

A sequel, Dance Central 2, was released on October 21, 2011 in Europe and October 25 in North America. It improves upon the original by adding true two-player gameplay in both competitive and cooperative modes, as well as the ability to create playlists, a freestyle-off option for DC2 on-disc songs and future DC2 downloadables, voice commands, and a more in-depth practice mode, allowing players to select specific moves in a routine to practice. Additionally, users can import songs from the original game, both on-disc and downloadable.

Dance Central 3 was released on October 16, 2012. It has a time-travel focused story mode, introducing numerous songs from the 1970s to the 2010s, as well as two new modes: Crew Throwdown mode, in which two teams attempt to outdo each other in dancing minigames, and a Party Mode. Both modes allowed more people to play the game.

Dance Central Spotlight was released on September 2, 2014 for the Xbox One as a download-only title.

Dance Central VR was released on May 21, 2019 for the Oculus Rift and Quest.

Kinect Star Wars is technically part of this line as well as the dance game portion, Galactic Dance Off, was developed by employees from Harmonix and likewise uses their gameplay interface.