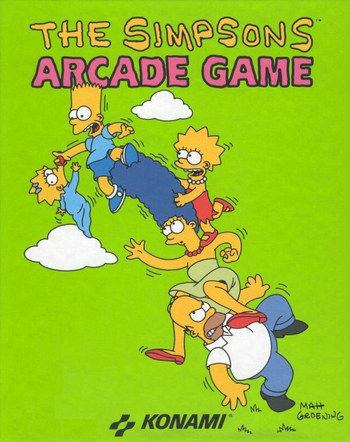 One day, the Simpson clan is strolling through Springfield, when all of a sudden Homer bumps into Smithers, who is stealing a diamond from Springfield Jewelers for Mr. Burns. After dangling in the air for a few seconds, the diamond takes the place of baby Maggie’s pacifier, and Smithers kidnaps her. The rest of the family takes it upon themselves to rescue Maggie, fighting tons of mooks, Smithers, and Mr. Burns himself in the process.
Advertisement:

Such is the plot of this well received, licensed arcade beat 'em up released in March 1991 by Konami, based on the first season of The Simpsons.

The gameplay engine is derived from Teenage Mutant Ninja Turtles (another game by the same company). Up to four people can play, assuming the roles of Homer (who uses good old fisticuffs), Marge (who swings her vacuum cleaner), Bart (who swings his trademark skateboard) and Lisa (who whips enemies with her jump rope). Two players could perform team up attacks on enemies, a feature introduced in this game. In addition, the four playable Simpsons are voiced by their respective voice actors from the series, providing quips and general observations. Due to the fame of the show, the game can still be found here and there wherever arcade games still exist.

Due to Acclaim's home console license for The Simpsons in the 8-bit and 16-bit eras, it was not ported to any of the major consoles of the era. However, it was ported to the Commodore 64 and as a DOS title, but due to obvious technical limitations, they couldn’t live up to their bigger brother. Thanks to MAME technology, the game can be emulated in all its original glory on modern computers. Outside of MAME, an online-capable port of the game was released as a downloadable title for Xbox Live Arcade and PlayStation Network in early February 2012, just ahead of the 500th episode of the series. Unfortunately, it's been delisted from both services.

A game inspired by it, The Simpsons Arcade, was released by EA Games for the iPhone. This game had a different plot: Though Burns and Smithers are still the villains, they now have a scheme involving putting a chip in a donut and recruiting ten other recurring characters as bosses: Chief Wiggum, Mayor Quimby, the Squeaky Voiced Teen, Roger Meyers, Jr., the Bumblebee Man, Kent Brockman, Sideshow Mel, Krusty the Clown, Rainer Wolfcastle, and Rich Texan. Homer ends up bumping into Smithers as he is moving the donut, and, assuming it to be a normal donut, goes throughout six levels fighting the twelve members of the conspiracy to get it. Reception was decent, but it was criticized for having a name that might dupe people into thinking they’re buying this game. That's not to say they don't put nods to the original arcade though.

For the platform game released by EA Games, go to The Simpsons Game.