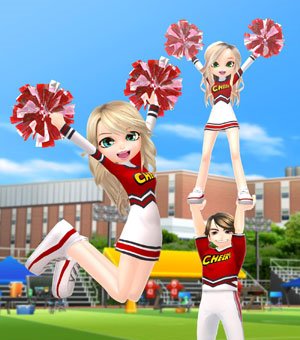 A cheerleader is you!
Advertisement:

A Namco Rhythm Game simulating cheerleading, released for the Wii in 2008. In terms of gameplay, it's like a motion controlled Osu! Tatakae! Ouendan / Elite Beat Agents, where you move the controller(s) in synch with the indicators. Just instead of dots you have lines that show you which direction to move the controller.

The first game was a modest hit, selling nearly half a million copies. The second game has sold about half that much, but did feature noticeable improvements, such as testing out the lag adjustment in the options menu, and more forgiving difficulties.