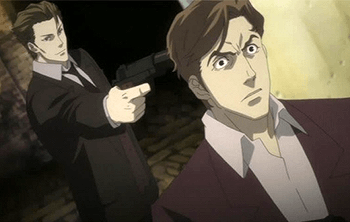 A character from one side is pointing a pistol at another. They exchange the usual insults and witticisms. We then hear an audible click from off screen. The camera moves to the side showing that someone from the same side as the pointee has just shown up and is pointing a gun at the pointer.

Often leads to a Mexican Standoff, especially when large groups of people are involved. May be followed by Pre-Mortem One-Liner from the gunman. Depending on his/her confidence, the target may then utter a literal "Facing the Bullets" One-Liner, or simply skip straight to Oh, Crap!

Occasionally subverted when a fourth party arrives to point at the pointer who is pointing at the first pointer.

The other version of this trope tends to involve goodies, but can involve baddies. The hero is making their escape from the baddies. They run down a corridor and find a door. They open it and run smack bang into a whole platoon of soldiers — who all proceed to ready their automatic weapons simultaneously.

Subtrope of Kinetic Clicking. See also Audible Sharpness, Dramatic Gun Cock and Land Mine Goes "Click!". See *Twang* Hello for the archery/throwing weapon equivalent. Also, give *Drool* Hello a look-see for the I-wanna-bath-and-therapy version: natural weapons usually included. Sometimes used by the Pushy Gun-Toting Villain as a way to show that they are serious and not fooling around.

The World is Not Enough

Bond ambushes Valentin in his own office.

The World is Not Enough

Bond ambushes Valentin in his own office.