Recap / Star Trek: The Next Generation S3E10 "The Defector" 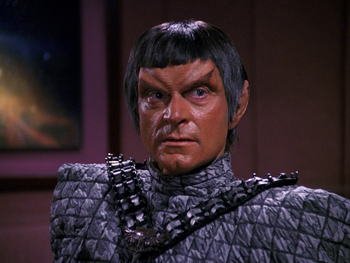 We open on a medieval encampment in the holodeck, where Data and a pair of holographic soldiers reenact a scene from Henry V in which King Henry goes incognito among his men. Picard is on-hand to provide guidance to Data on using Shakespeare to better understand the human condition.

A Romulan scout ship is spotted in the Neutral Zone. The ship hails the Enterprise, requesting assistance as it is being pursued. When the scout ship enters Federation territory, the Enterprise extends its shields to protect it, only to find that the pursuing warbird is perfectly willing to turn around and head home without a fight. They beam aboard the occupant of the scout ship, who introduces himself as Setal and demands to see the captain immediately. He claims to be a defector and warns Picard of Romulan plans to attack the Federation. He reveals that the Romulans have already established a base on Nelvana III, inside the Neutral Zone, which the Federation’s sensors have evidently failed to find. He advises Picard that if he destroys that base now, it will end the war before it even begins.

After Setal is excused, the crew discuss whether they should give any credence to his story. Some suspect him of being a plant sent to draw them into the Neutral Zone to justify a retaliatory attack. They plan to take full advantage of the situation, though, by investigating the ship Setal arrived in, but it self-destructs before they have a chance. Setal tells them that he came to stop a war, not give the Federation an advantage over the Romulans. The crew grow increasingly distrustful of Setal, who responds with equal derision toward them. After Riker escorts the Romulan to his new quarters, Setal retrieves a small disc hidden in his boot with an ambiguous expression.

Picard asks Data for his analysis of the ship's crew as they grapple with the possibility of war. Data wonders why Picard doesn't already know himself, and Picard notes that, unlike Henry V, he cannot disguise himself to mingle with the crew.

A further round of interrogations bears little fruit, as Setal is clearly holding something back. Geordi tells Data that in spite of everything, he believes Setal because his gut tells him that he's telling the truth. Data finds this intriguing and begins to observe the Romulan to see if his "gut" can tell him anything. Setal begins to reminisce about Romulus and expresses his sadness at never being able to return, so Data takes him to the holodeck to create a simulation of Romulus. Setal tells him to turn it off, saying, "I don’t live here anymore." He then has Data tell Captain Picard that "Admiral Jarok" wants to see him.

Setal admits that he is actually Admiral Jarok, a Romulan war hero with a particularly infamous reputation within the Federation. Picard urges him to spill his guts and convince him that he's honest. Jarok refuses to betray his people, but Picard tells him that he is already a traitor and must fully commit. Jarok says that he's only doing this as a last resort to stop a war and protect his family, but he gives in and provides some technical details to Picard to back up his claims.

A message comes in from a Klingon captain, which Picard enigmatically has Worf handle off the bridge. Meanwhile, Picard orders a sensor fired into the Nelvana system, which uncovers unnatural potential evidence of Romulan technology in the otherwise uninhabited world. With Jarok's words and these findings, Picard finally orders the Enterprise into the neutral zone to investigate Nelvana III.

When they arrive, they find no base and no sign of any activity. Jarok is genuinely shocked and realizes he had been given false information as a test of loyalty. The Enterprise makes to leave, but two Romulan warbirds uncloak in front of them. One of them is captained by none other than Commander Tomalak, whom you might recall from "The Enemy." Tomalak demands an unconditional surrender, but Picard states firmly that he'll die fighting if necessary. As the Romulans prepare to attack, Picard gives a signal to Worf. Three Klingon Birds-of-Prey uncloak, surrounding the Romulan ships, and Tomalak yields.

Jarok realizes that his sacrifice was all for nothing and takes his own life with the Felodesine chip he'd hidden in his boot. He leaves behind a letter to his family, which Data protests is impossible to deliver, but Picard says that if there are others with Jarok’s courage, there may come a day of peace when they can deliver it.