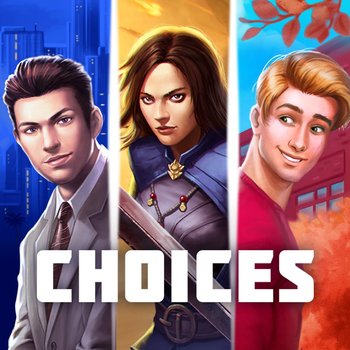 Gameplay is pretty much the only thing these stories have in common. (left to right: Dave from Most Wanted, Kenna from The Crown and the Flame, Chris from The Freshman)
Advertisement:

Choices: Stories You Play is a collection of Visual Novel Games released by Pixelberry Studios for iOS and Android. Pixelberry also created the games High School Story and Hollywood U Rising Stars. Additionally, the game shares some of the creators of Cause of Death and Surviving High School. The game was released on August 17, 2016 and is still releasing content to this day.

Choices is a collection of Visual Novel games. Each game is divided into volumes known as "books" - some games only compose one book, but some are multiple-book stories. Each book is divided into chapters, and chapters are released on a weekly basis (the day of the week varies), meaning that Choices is an Episodic Game. Book lengths can vary, but 15-17 chapters is the most common. One of Choices most defining aspects is the fact that it is a Genre Roulette at its heart; although the gameplay remains pretty much the same, the story, setting and theme change entirely from story to story (and some stories have different art styles than others), allowing each game to tell something different.

The app itself is an interface from which you can access the stories. Two forms of in-app currency purchasable through Microtransactions (or even larger transactions if you're really invested) exist; these are Diamonds and Keys, and your balance for both are shared among all of the stories in the collection. Each story requires you to give up a Key to play a chapter, and in each story some special choices will require you to pay Diamonds to make them. Keys refill over time at one key every three hours, but you cannot hold more than two keys obtained for free at once. Players receive two diamonds upon completing a chapter for the first time. Replays don't automatically give free diamonds; however, users can earn one additional diamond by watching an ad after playing a chapter (even a previously played one). You can play through a whole story without paying anything, but on top of having very few Diamonds with which to access special choices that offer lots of depth and backstory, you'll also only be able to play through at most two chapters at a time, so you won't be able to blaze through a story quickly. This business model qualifies as both an Allegedly Free Game, and Freemium.

The game was originally released in August 2016 with three titles: The Freshman, Most Wanted and The Crown and The Flame. All of these books debuted with all of their chapters available at once. Since then, many more books have been released.

open/close all folders
List of Choices Stories
VIP-exclusive books
These books are available exclusively to users who purchase a monthly VIP subscription, though they will eventually be released to the entire public. So far, six VIP books (Hot Couture, With Every Heartbeat, A Very Scandalous Proposal, The Unexpected Heiress, Wolf Bride and Ms Match) have been publicly released in full.note VIP users still have access to the full books.. The exact general release date for the last VIP book (Slow Burn) has not yet been announced, although it is currently slated for release in Fall 2022.

Starting from the last third of 2021, all new books will go through a VIP phase before being publicly released halfway through, with Shipwrecked being the first book released under this plan. Currently, Crimes of Passion, Untameable, The Princess Swap and The Cursed Heart are being released weekly, with Immortal Desires scheduled for general release sometime in July 2022.

Tropes that apply either to multiple stories, or that apply to the game itself: