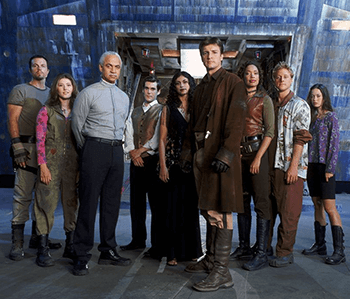 (from left) Jayne, Kaylee, Book, Simon, Inara, Mal, Zoe, Wash, and River. Inside her boots: River's feet. In the background: Serenity.
Inara: You're lost in the woods. We all are. Even the captain. The only difference is, he likes it that way.
Mal: No, the difference is, the woods are the only place I can see a clear path.
— "Serenity"
Advertisement:

If you're looking for actual fireflies, see Lighting Bug.

Firefly is a Science Fiction Space Western that ran on the FOX Network in the 2002-03 season. It was canceled after 14 episodes were produced, three of which not airing until after the show's cancellation. Its quick cancellation helped give rise to The Firefly Effect. A DVD box set was released in December 2003 and has sold briskly ever since.

In the future, humanity has spread across the stars, terraforming planets for colonization and creating a new frontier reminiscent of the old Wild West. The dominant power in this time is the monolithic Alliance, whose iron grip on the 'verse has tightened after a failed rebellion by a group known as 'Independents' or 'Browncoats' (the latter having become the demonym for the franchise's fandom).

Malcolm Reynolds is a former Browncoat who now captains a run-down tramp freighter called Serenity. Working as an amoral jack-of-all-trades, he tries to eke out a life for himself and his crew away from the reach of the Alliance. However, things change when he inadvertently lets a deadly Alliance secret board his ship: a Mysterious Waif who was subject to horrific experimentation aiming to turn her into a living weapon.

has all 14 episodes of the series available for streaming. (NOTE: Does not play outside of the US.) It is also all up for instant stream on Disney+, Amazon Prime (if you buy the series), and Hulu Plus. Starting March 6th 2011, the show also began playing, in the correct order, on the Science Channel and in glorious HD. This page has a recap page here.

Firefly's life story is an interesting one: despite its early cancellation, it became a runaway cult hit DVD series spawning media including a feature film titled Serenity and various comics and books. A full list of media can be found on the Franchise page.

There are also constant rumors about a second television series (Whedon and many of the principals have constantly said they would be willing to pick up the show, with Fillion going so far as to say he'd be willing to buy the rights from Fox), and the cult status the series has attained after its premature cancellation may have saved a later Whedon work from a similar fate.

In November 2012, the Science Channel aired a Firefly 10th anniversary special, titled "Browncoats Unite". It featured two of the main writers of the show, Jose Molina and Tim Minear, along with most of the cast, including Nathan Fillion, Adam Baldwin, Summer Glau, Alan Tudyk and Sean Maher, where they did a sort of retrospective of the show's history and its cult-classic status over the past ten years. In addition, Jewel Staite, Gina Torres and Morena Baccarin were interviewed separately and added their own comments on their involvement with the show. The forty-minute special culminated in the writers and actors taking the stage at their Comic-Con panel, which included Joss Whedon himself as well.

In 2019, the rights to the franchise passed to Disney with their purchase of 20th Century Fox, and in early 2021 rumors began circulating that Disney was developing a reboot of the series for its Disney+ streaming service.

These rumors are at present not solidly confirmed.

There's no place I can be
Since I found serenity
You can't take the sky from me...