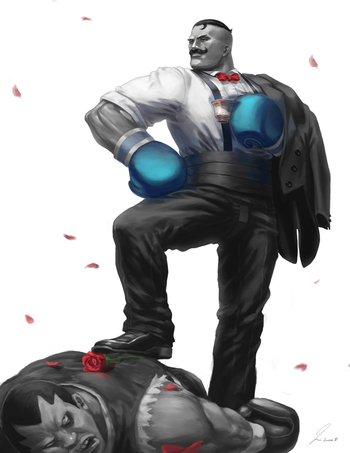 "You have no dignity!" He, on the other hand, drinks tea with boxing gloves on.
Image

Spenser: Has anyone ever told you that you coalesce reality? That you brighten a room and make everything seem lighter and more pleasant?
Susan Silverman: No. They usually only say that I'm good in the sack.
Spenser: [thoughtful pause] They are accurate but limited. And if you give me their names, I'll kill them.
— The Widening Gyre
Advertisement:

In most media, the average badass is usually a hairy-knuckled brawler unfamiliar with the finer things in life, but not this guy. Like his Trope-brother the Cultured Warrior, the Cultured Badass knows how to be sophisticated, is an expert on gourmet food and art, and knows how to behave himself at a formal affair. In short, he knows how to be a gentleman but he also knows how (and when) to kick your ass.

Just because he enjoys La Bohème and can tell the difference between bottles of 1938 and 1941 Moët et Chandon from the taste sound of it being poured doesn't mean he won't beat you to death with them. Get on his bad side and you will live to regret it if you are lucky. (If you're unlucky, you won't live at all.) In either case, he will fight like a gentleman.note This means that they follow the code of Old-School Chivalry, issue a proper challenge to duel, and allow you to properly prepare yourself before beating you senseless with a table leg.

Similar to Cultured Warrior, except he's not in the military (though he might be a veteran). Sometimes he's a Badass Bookworm or Genius Bruiser, though not necessarily. Sometimes he's a Warrior Poet, though there's often nothing spiritual about his love of culture...he just likes the finer things. When he's evil (or better, Affably Evil), he's Wicked Cultured and when he's nice or a good guy, he's a Gentleman and a Scholar. If he's in the military, expect him to be an Officer and a Gentleman.

If a woman is a Cultured Badass, she's usually either a Lady of War or Silk Hiding Steel, but this is not always the case.

In between rounds, Piston Hondo meditates and recites Japanese proverbs.

In between rounds, Piston Hondo meditates and recites Japanese proverbs.