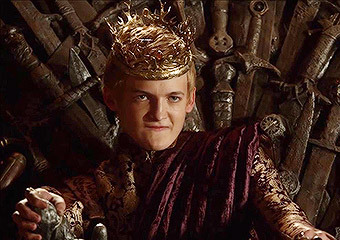 Our hero, ladies and gents. Disclaimer: Not kidding.
Advertisement:

King Joffrey Baratheon dies to the Strangler on his wedding day. In his final moments, he falls into endless agony as his vision melts into purple waves.

He wakes up back at his apartments in the Red Keep, three days after the death of Jon Arryn.

Certain that this can only be divine will, he lives his life again, making sure to punish those he considers responsible...

...and dies again. And again, he returns to the same point. Over and over and over.

Mired in despair at the neverending cycle of life and death, he rapidly tires of sitting and ordering others, each life luring him into worse and worse revelations. Frantic for answers, his mind ever-fraying, Joffrey rises to seek the answers to the Cycle, an endless journey that takes him from King's Landing to Winterfell, from Valyria to Yi-Ti, from Sothoryos to Asshai, life after life, seeking the truth of the mysteries buried beneath Planetos and the horror of the Long Night...

Will Joffrey sink into the madness of the Purple? Or will he emerge as something... changed?

Only time will tell...

"NOT THE SILENCE! PLEASE NO!"