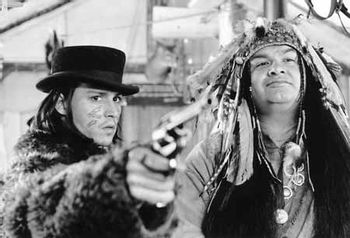 "It is preferable not to travel with a dead man."
— Henri Michaux
Advertisement:

Dead Man is an acid/existential Western written and directed by Jim Jarmusch, released in 1995. The protagonist, played by Johnny Depp, is an out-of-work accountant from Cleveland named William Blake. He goes to a frontier town on the promise of a job, but once there finds the position already taken. He gets briefly mixed up in a love triangle, kills the son of the most powerful man in town in self-defense and is forced to run for his life with a bullet in his chest.

While trying to evade the bounty hunters and marshals who are after him he meets Nobody, a solitary and erudite Native American who- upon hearing his name- believes him to be the wandering spirit of the English poet William Blake, even though the name is purely coincidental.