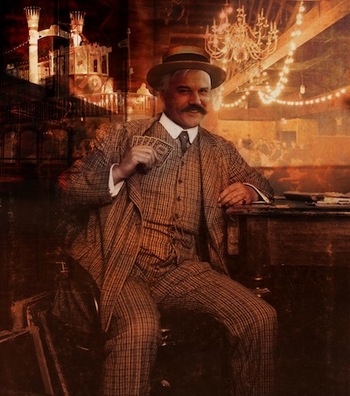 He said, "Son, I've made a life
Out of reading people's faces
And knowing what the cards were
By the way they held their eyes..."
— Kenny Rogers, "The Gambler"
Advertisement:

Someone whose primary source of income is gambling.

Risking money on games of chance and skill is a pastime that has been around since the dawn of civilization. The Professional Gambler is someone who emphasizes the "skill" part of the equation. They know the odds, can read the other players' intentions and resources, and know the best strategies. They may not always win, but win often enough to feed themselves and stay in "business."

As this way of earning an income only works with games that reward logical thinking, experience, and possibly applied psychology and acting ability, the professional gambler does not play at purely luck-based games, like roulette or slot machines. Favoured games are poker, blackjack, and other card games; more rarely seen are sports betting, dice games or billiard. In modern times, some will even try their chances at an online casino bonus

. The exact skills required of a professional gambler vary from game to game: in blackjack, savant-like memory and counting skills help to make the game profitable, and poker requires practical psychology and acting.

A professional gambler may not actually cheat, but certainly knows how to, and how to spot another cheat. Some games may come down to who can cheat the best. Expect to see The Magic Poker Equation come up in stories involving this character—though often for their less-professional targets.

In the Western, professional gamblers are usually dressed in fancy clothes, looking quite prosperous but a bit tacky. Thus the adjective "tinhorn" often attaches to them. Many will wear a fair amount of jewellery, both to show off, and to have something to toss into the pot if the night is not going well. The gambler's weapon of choice is a Derringer or other small hold-out gun; this can make it hazardous to check his sleeve for concealed aces.

A frequent "bit" in Westerns is for someone on the losing end of a poker game to lose their temper and accuse the pro of cheating—this can start a Gambling Brawl.

Despite his sometimes glamorous lifestyle, the professional gambler is usually a disreputable figure, and will often come to a bad end in fiction.

Compare The Gambler, who uses a gambling motif in his or her fighting style. See also the Card Sharp, who uses cheating and sleight of hand to win, and Hustling the Mark, feigning poor playing skills to draw others to play against him. And if you're trying this but losing most of your money, then you might be The Gambling Addict.

American Boot should have known better to go up against a card shark like Spy.

American Boot should have known better to go up against a card shark like Spy.