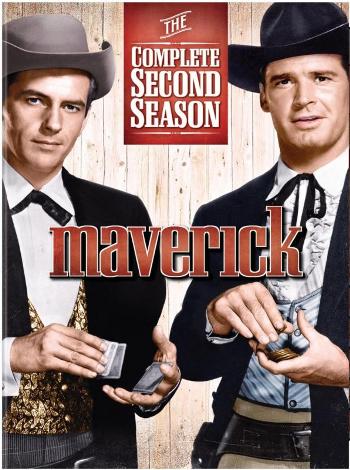 Maverick is a Western TV series that ran from 1957 to 1962. It starred James Garner as Bret Maverick, a gambler and conman travelling around the Old West seeking a quick buck and (more or less reluctantly) helping the helpless.

Later episodes introduced other members of the Maverick clan: brother Bart (Jack Kelly), English cousin Beau (Roger Moore), another brother, Brent (Robert Colbert), and, in one episode, father Pappy and Uncle Bently (Garner and Kelly again). Diane Brewster had a supporting role as Samantha Crawford, the recurring love interest/nemesis of the Bros (and one of several Drop-In Characters throughout the series).

A film version was made in 1994, with Mel Gibson as Bret Maverick and James Garner in a supporting role.