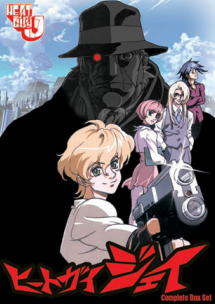 Daisuke Aurora, a laid-back Special Services officer, solves crimes and tries to catch the most dangerous criminals that do their dirty deeds in the city of Judoh. Aiding Daisuke is his powerful android partner J, nicknamed "Heat Guy" because of the need to vent superheated air from his body after periods of action. The show's supporting cast includes Clair Leonelli, Ax-Crazy villain and boss ("Vampire") of the Leonelli crime family; Ken Edmundo, a perpetually irritated crime scene investigator; Kyoko Milchan; the accountant for the Special Services Division who briefs Daisuke on his cases, and Boma, a mysterious swordsman searching for someone called "Usagi".

The 26-episode series, which was produced by Satelight, was licensed in the United States by Geneon, in the United Kingdom by Manga Entertainment, and in Australia and New Zealand by Madman Entertainment. It remains infamous for how much Geneon paid to license it—just as much as Funimation paid for Fullmetal Alchemist—and the resulting low sales in the US.

A real man has a duty to edit a trope list.